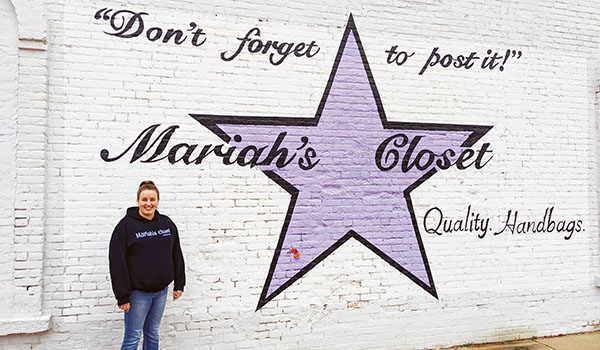 DOWAGIAC — A new downtown Dowagiac artwork is the result of a business owner aiming to put the city “on the map.”

Beth Clark, the owner of Mariah’s Closet, 113 Commercial St., Dowagiac, was thinking of ways to both expand the reach of her business while improving the outer appearance of the building’s wall facing Pennsylvania Avenue.

That is when Clark came across the art-filled Facebook posts of Alex Ann Allen and immediately found her answer.

Allen, an artist out of South Bend, was commissioned by Beth and Corey Clark to paint a mural on the side of their business, which sells a variety of purses and handbags. Allen is a mutual friend of the Clarks.

The mural consists of a large purple star with “Mariah’s Closet” written across the front, “Quality Handbags” written on the lower right side and “Don’t forget to post it!” draped across the top of the mural.

“We wanted to do something in that space,” Clark said. “We were trying to come up with an idea that would draw attention to our store but something that wasn’t necessarily a purse. We chose a star because we want it to be recognizable. We want that to be associated with us. All of our flyers that we pass out have a star on them.”

The phrase “Don’t forget to post it” was something Clark wanted to include in the mural to encourage customers to continue to engage the business on social media.

“When somebody comes into the store, and they buy a purse, I always say ‘don’t forget to post it,'” Clark said. “I started saying it to every single customer because we do everything through Facebook, so it got to the point where our customers, before they would come in and purchase, would say ‘I won’t forget to post it’. It was something that caught on, so it’s kind of just something that we say to every customer when they leave.”

After Mariah’s Closet acquired a permit from the city of Dowagiac, Allen was given the green light to start on the project. She primed the wall on Sunday and started the project Tuesday morning and finished later that afternoon.

“[Beth] gave me the design and converted that sketch to a digital format,” Allen said. “That helps me know where to place the letters. I did an outline of the lettering and used spray paint, which I’m getting more into. It’s faster and more efficient. After priming the background, I filled in the star.”

Allen makes portraits for a living and has recently begun painting murals that can be found throughout South Bend as well as Bridgman. She plans on attending the American Academy of Art College in Chicago next year.

“We were very impressed with her work,” Clark said. “She does an amazing job, and we’re happy she was able to come out.”

Engaging the community is one of Allen’s favorite aspects of her art project.

“One of the things I really enjoy about what I do is the people you get to meet on the street,” Allen said. “It’s nice to talk to the people who interact with the area on a daily basis. I wish there were more colors on the walls [in Dowagiac], but those things take time.”

The Clarks are hoping the mural will become a trendy social media destination in the city.

“We want it to be one of those Instagram locations that you have to stop at when you’re in Dowagiac,” Clark said. “We want people to take pictures of it or with it to put Dowagiac on the map. We ship everywhere. I know that we do have purses in Washington state, we have purses in Florida and we have persons in New York City. We just want to put Dowagiac on the map. The more customers we can bring to our store will only benefit everybody else downtown. We want it to be a viral sensation.”