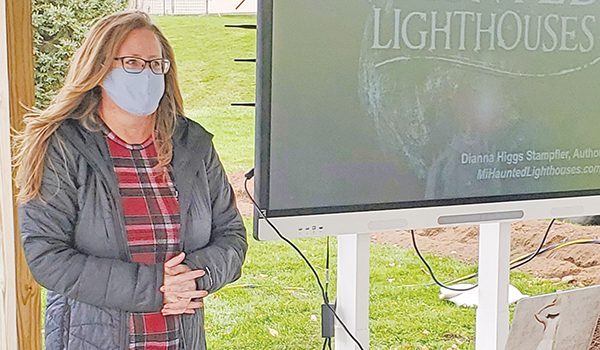 CASSOPOLIS — Wednesday afternoon, more than a dozen guests braced the cold, wrapped in blankets and earmuffs, outside Cass County Council on Aging in Cassopolis waiting to hear a spooky story.

Diana Stampfler, author of “Michigan’s Haunted Lighthouses,” hosted a presentation at the COA. The presentation, hosted outdoors with masks required to comply with social distancing mandates, took stories from Stampfler’s book to share spooky tales of lighthouses thought to be haunted within the state of Michigan.

Home to more lighthouses than any other state in the U.S., Stampfler said more than 30 of Michigan’s lighthouses are rumored to be haunted. She has been researching and visiting Michigan’s haunted lighthouses for more than 20 years. Her book on the subject was published in March 2019.

“There is a wealth of history at our lighthouses,” Stampfler said. “I am so happy to share these stories with you.”

Close to home in southwest Michigan, Stampfler started her presentation with the South Haven lighthouse’s story. Allegedly, the beacon is haunted by former keeper James S. Donahue, who lost his leg during the Civil War at the Battle of the Wilderness.

According to Stampfler, Donahue was so dedicated to his job that he often slept at the beacon and routinely climbed the stairs, despite his disability. She said it is believed that both Donahue and his first wife haunt the beacon, with several stories having been told about doors opening and closing on their own or guests hearing voices.

In total, Stampfler shared 13 ghost stories from across the state with the COA, which she believes is the spookiest number.

COA staff member and event organizer Leslie Vargo said she was happy with Stampfler’s presentation and that the COA’s guests enjoyed it — despite the less than ideal weather.

“This is a really good turnout,” she said. “Anything from up north is popular, and people really love lighthouses.”

The COA was closed to the general public for months due to COVID-19 restrictions. Now that the COA is reopened, Vargo said the staff is still having to come up with creative ways to host programming and connect with its senior citizens. Despite the additional obstacles programs face due to the continuing pandemic, Vargo said Wednesday’s presentation was proof that the extra work was worth the effort.

“People are really wanting to get out and do things,” she said. “We’re glad to be able to give them a place to get out of the house and do it in a safe way.”

Brandywine knock out of state tournament in quarterfinals

KALAMAZOO — The Brandywine tennis team was eliminated from the Division 4 state tournament in the quarterfinals on Thursday. The... read more