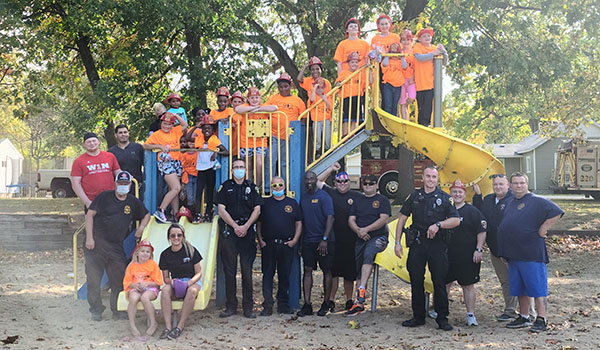 DOWAGIAC — The Dowagiac police and fire departments put their lives on the line every day to keep their community safe.

Alas, no one could save them from a loss to children on the kickball diamond.

The children of Parkside Townhouses defeated the departments 12-6 Friday at the field adjacent to the townhouses, 420 E. Railroad St., Dowagiac.

The Parkside children took an early 4-0 lead until Dowagiac fireman LT Stewart came up to kick a three-run home run, which cut the lead to 4-3. A member of Parkside’s team kicked a double with a Run Kicked In to extend the lead to 5-3. Parkside then sent the “heavy kickers” in, who cleared the bases to finish the game.

“We thought it would be a great way to get kids involved,” Wagley said. “We’re all part of one big community. The police and fire departments were excited. It was a great time for everyone.”

“So much is going on in our world right now,” she said. “There is a lot of negativity out there when it comes to the police. This game is a good way for the children to know that you shouldn’t be afraid of the police. It was a great opportunity to get to know everyone better.”

Dowagiac police and fire department administrative assistant Michell Outlaw enjoyed the event and believes both the first responders and the Parkside children did too.

“We had a great turnout,” Outlaw said. “Honestly, it was much better than what I had anticipated. Both teams had fun, and it a great way to engage the community.”

With the success of the kickball game, Wagley and Outlaw hope to schedule another game in the future.

“The police and fire departments will be looking forward to a rematch,” Outlaw said.