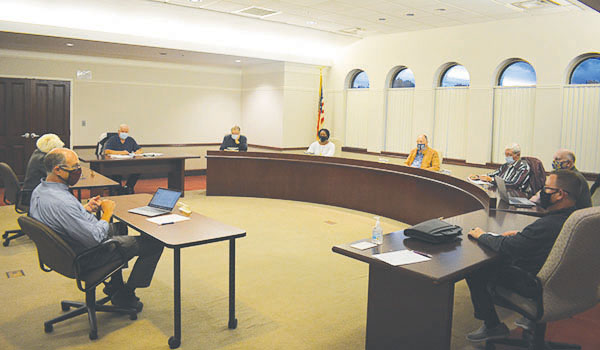 DOWAGIAC — The city of Dowagiac reached an agreement with the Police Officers Labor Council regarding new contracts for officers.

The Dowagiac City Council approved two one-year collective bargaining agreements between the City of Dowagiac and the POLC during Monday’s meeting at City Hall.

Dowagiac City Manager Kevin Anderson said that, while the POLC typically asks for three-year agreements, it recognized the economic uncertainties facing communities during the pandemic and asked for one-year contracts for Dowagiac police sergeants and patrol officers.

According to its website, the POLC represents more than 350 units statewide and has the largest full-time professional field staff of any union representing public safety in the state.

“We couldn’t really speak to them about what long-term economic conditions were or would be until we get deeper into this next year,” Anderson said. “All the provisions stay the same, and the pay increase is very much the same as what we did with the classic compensation.”

The contract began Oct. 1 and runs through Sept. 30, 2021, and will include a one percent base wage increase with a one percent lump sum pay.

“That’ll allow us to keep the base in a relatively constant manner,” Anderson said. “That way, when we get into negotiations next year and have a better financial peace, we can make a deal from there.”

In other business, the council also approved a resolution authorizing a bid for electric pole replacement to Flory Line Construction.

Midwest Energy and Communications, of Cassopolis, identified 12 electric poles during its evaluation of Dowagiac’s electrical system as, “being critical and beyond their useful life.”

The MEC solicited bids on the city’s behalf for the removal and replacement of the poles, during which attachment equipment will be upgraded.

“We have money in the budget set aside for projects like this,” Anderson said. “This is the lowest bid of the three that we received in the recommendation of getting these holes removed and replaced.”

Also Monday, the council moved to approve a public hearing to consider a request to abandon an alley located between Oak and W. Railroad Streets.

Residents near the alley have submitted a request to vacate it. Anderson said the abandonment of a right-of-way requires notification to all impacted property owners, and a public hearing. If approved, half of the right-of-way would go to each of the abutting property owners.

“There are four houses that are attached to the alley,” Anderson said. “What they would like to do is be able to expand their yards a little bit. It’s not gonna be any problem for us as a city. We’re still gonna keep an easement on it, so if there’s any utilities under there we can still have them. It’ll be a nice little addition to their lots. The folks will take good care, so it’ll be a nice, positive thing. It takes some time because we have to call for a public hearing before we abandon it. There’ll be a notification sent to everybody in and around the neighborhood, so it’ll still take 45 days to process everything.”

“That’s a piece of property that the city has owned for probably five or six years now,” Anderson said. “Every couple of years, somebody wants to add to their yard with an abandoned property so this will be good to be under private ownership and they’ll take good care.”

POKAGON TOWNSHIP — Five people were arrested during a search warrant in Pokagon Township Thursday, with charges ranging from methamphetamine and... read more