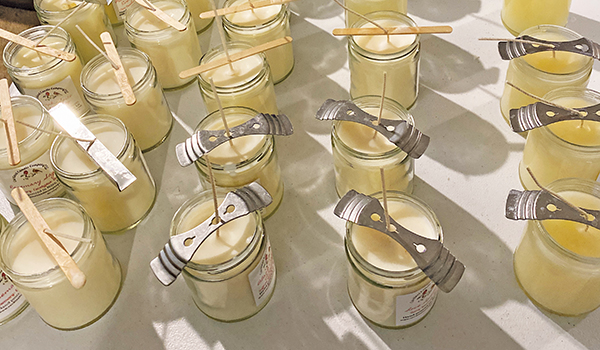 NILES — Two vendors, Sticky Spoons Jam and Cardinal Candle Co. have been excited to prepare for a market that holds the place this year of the traditional festival celebrating the area’s biggest harvest: apples.

A celebration of fall and the area’s apple harvest, the Four Flags Area Apple Festival has been converted into a harvest market. The market will take place at 10 a.m. to 7 p.m. Saturday, Sept. 26, and 10 a.m. to 4 p.m. Sunday, Sept. 27. The event will be hosted at the festival grounds, located at the corner of 17th and Oak streets in Niles.

According to Abby Zeider, pageant and sponsorship chairperson for the Four Flags Area Apple Festival, around 85 vendors have signed up for the two-day event organized in place of the traditional festival.

Vendors and food trucks will offer their goods to-go in the socially distanced environment.

“We lost her to Lewy body dementia,” Jill said. “Our business is named in memory of her and my father-in-law, who we lost years ago.”
Their candles bear a male and female cardinal to represent the two of them.

The candle makers are excited to be at the harvest market this year, despite the lack of carnival and contests.

“With everything else being postponed right now, it’s just exciting that everybody can come together for this,” Jill said. “With everything as crazy as this year, you still have a day of relaxing, conversation with new people and old friends you haven’t seen. Add some laughter in the mix, support small business, and it’s a perfect weekend. I’m so happy we can still do it.”

Another vendor excited to return to the Apple Festival, in whatever form it takes this year, is Sticky Spoons Jam owner Aiye Akhigbe.

“When Abby [Zeider] reached out and said they were doing [the market], I said ‘sign me up,’” Akhigbe said. “I asked no other questions. I said, ‘just put my name on it. I will come out. I will set up my tent, and I will have apple pie jam at the top of the list,’ which it is.”

Sticky Spoons Jam makes the special jam just for the Four Flags Area Apple Festival each year. This year, however, Ahkigbe said she was determined to make it and offer it even if the event was completely canceled.

The Apple Pie Jam from Sticky Spoons Jam is the company’s most popular offering throughout the year, and it is only available during the annual festival. In the four years the U.S. Navy veteran owned company has been creating unique jams, Ahkigbe estimated she has created around 100 flavors so far.
“I stopped counting at 88,” she said.

Sticky Spoons Jam will have 29 of its flavors at the Harvest Market, including the Apple Pie Jam.

With Cardinal Candle Co.’s matching offering, Chamberlain said she loved that the two companies could work together.

Chamberlain and Akihgbe have been keeping each other up to date on which festivals and markets are available to them to participate in through the shifting mandates and precautions.

“Everyone has to work together and lift one another up,” Ahkigbe said.

According to Zeider, there will be food trucks like Nedderman’s Steak Tips, El Amigo Pepe and the Pretzel Wagon. Other food offerings will include elephant ears, dumplings, donuts, cappuccinos, bubble tea and more.

Chamberlain cannot wait to set up her booth for the market.

“What is Niles without Apple Fest?” she said. “We need our Apple Fest.”