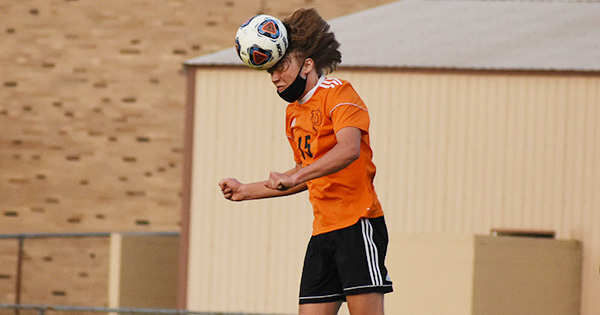 Adams had a goal in each half, while Bryce Taberski had the other goal for the Bobcats.

Isaac Martin and Hunter Inman picked up the assists on the two Adams goals. Andrew Schadler assisted on the Taberski score.

“Brandywine‘s passing is looking better, and they are playing well as a team,” said first-year Brandywine coach Caleb Adams.

The Bobcats are right back on the pitch Thursday as they host Schoolcraft at 5 p.m.

DOWAGIAC — A pair of goals in the final 16 minutes gave visiting Plainwell a 2-0 victory in the battle between the top two teams in the Wolverine Conference standings Wednesday.

The Trojans came in with a 3-0 record, while the Chieftains were 3-1.

Plainwell continues to lead the boys soccer standings with 12 points, while Otsego (3-0-1) is second with 10 points. Allegan (3-2) and Dowagiac are tied for third with nine points. Paw Paw is fifth with eight points.

After a scoreless first half, the Trojan scored the game-winning goal with 16:07 remaining in the match. Plainwell added another goal late to complete the scoring.

Chieftain coach Mike Williams said his team played well, especially in the first half. However, with a lack of experienced subs to send in, the Trojans wore his team down.

“We actually played really well,” he said. “It was our best game of the year overall.”

Williams said that Plainwell has yet to give up a goal this season.

“They are No. 1 in our conference. We were No. 2, so this was a big opportunity to do something and our team knew that,” he said. “They came to play. I was happy with their play.”

Williams said he went with a different formation against the Trojans to be more defensive. Dowagiac did have an opportunity to score in the first half, but Cole Parker’s penalty kick hit the crossbar and bounced away.

“We played with our defensive formation and it was working,” he said. “We were still getting offense, but at the same time frustrating the heck out of them. We did the same thing to them two years ago, and we ended up with a tie. We do not have a deep bench. We do not have an experienced bench. We are short a couple of starters who are at that level right now.

The final stats were a close as the final score as Plainwell held a 7-6 advantage in shots on goal. Dowagiac keeper Alejandro Martinez stopped five of the seven shots he faced.

The Chieftains return to action on Monday as they travel to Sturgis for another Wolverine Conference contest. The match is scheduled to begin at 6 p.m.

BUCHANAN – A new multi-million dollar development looks to be closer to moving forward after action by the Buchanan Planning... read more