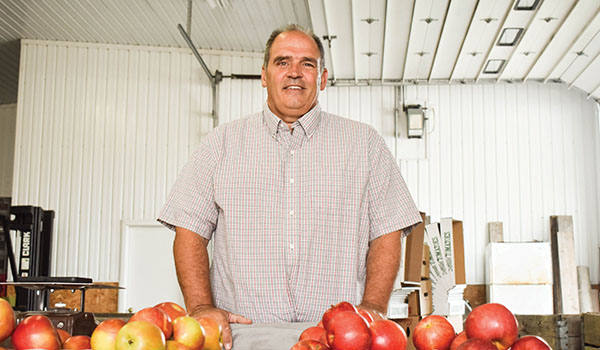 BUCHANAN — Driving down a gravel road slowly with grape vines and apple trees on each side is a sound of celebration for many seeking fresh apples and cider.

For apple seekers visiting Holloway Apple Orchards, 1737 Smith Road, Buchanan, they will be rewarded at the end of the road with baskets and bags of fresh apples and apple cider ready to be taken home and enjoyed. The orchard does not offer U-pick, but is located just off of U.S. 31 to make for a quick stop to grab apples fresh from the source.

Four varieties of apples, including honeycrisp, gala, golden supreme and jonagold, sit fresh, shiny and crisp in the barn’s retail area for visitors to choose from.

Holloway’s parents arrived in Buchanan in 1968, and the farm has stayed in the family since. He is no stranger to the ups and downs of apple farming in the southernmost tip of Michigan’s fruit belt.

In mid-May, a late spring freeze damaged some of the apple crops which were just beginning to bloom. Holloway said in May the king bloom, or center blossom, showed some frost damage. He anticipated the fruit higher on the tree, where the frost was not so intense, would make it through the season.

“We had damage to our apples, so the higher up the tree, the better the crop was,” Holloway said. “It’s less than a full crop, but still enough.”

The weather following the frost turned into a better situation for the orchard.

“We had a warm summer, so harvest is ahead of schedule,” Holloway said.

The orchard will be missing some of its usual festivities this year.

“We supply the [Four Flags] Apple Festival, normally, with apples,” Holloway said. “This year, they’re not doing it the same way.”

Due to COVID-19 precautions and gathering mandates, the festival has been converted to a “harvest market.” The traditional apple festival products shop will not be featured this season.

Holloway said people have already begun finding their way to the orchard to take home apples with fall’s arrival.

“October is more of the ‘apple time,’ when people traditionally think of apple and cider,” Holloway said.

BUCHANAN – With a background in history, the law and government, Heather Grace appears to be a perfect fit for... read more