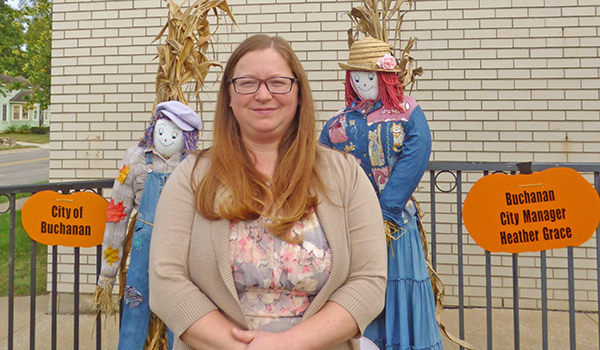 BUCHANAN – With a background in history, the law and government, Heather Grace appears to be a perfect fit for the Redbud City as she takes over the reins as the new Buchanan City Manager.

Grace, 36, started her new duties Monday and is spending the week getting acquainted with the workings of the city and meeting with department heads and employees. She’s also touring the city and starting to make contact with local organizations.

Buchanan City Commissioners chose Grace from a field of six candidates after early August interviews. She is a practicing attorney and the former city manager of West Branch, Michigan in the northern part of the Lower Peninsula. Commissioners signed a three-year contract with her in late August with a starting salary of $85,000.

“It’s been absolutely wonderful,” Grace said Tuesday morning in the office she now shares with outgoing City Manager Bill Marx. “I continue with my original opinion of the town, everyone has been overwhelmingly welcoming.”

She and her high school sweetheart husband, T.J., visited Buchanan twice over the summer-first to get a feel of the town she was applying to lead and then in August to scout out a new home for them and their two young children ages eight and two. The family is now completely moved in to their new home here.

Grace said her first day on the job included a lot of information gathering.

“It was a lot of information gathering and chatting with Bill about some of the overarching issues facing the city,” she said. “I haven’t been able to go to all of the city’s facilities and meet all the staff but we took a ride around the city so I could get the lay of the land.”

When she was hired, she said one of her first missions would be to go on “a listening tour” to hear from city residents. While COVID-19 restrictions have made that a little more difficult, she is starting out this week visiting with local community groups.

On Tuesday, that meant a visit with the Friends of the Ducks Committee. That committee formed several months ago with the goal of making sure the ducks around the Duck Pond have enough feed and are taken care of.

“I said I had to be part of any group that cares for ducks where one is named Elvis,” she said.

“I’m hoping to pick people’s brains to get their ideas about what organizations I should branch out to,” she added. “I will probably join as many and attend as many as possible … It has impressed me seeing how active the community is. It’s nice seeing how engaged people are and how they pour their hearts and souls into what they do.”

Grace started out planning to be a history teacher before ending up going to law school. “I love history and initially I was planning to be a history teacher but I decided it was not for me after I did some student teaching,” she said. “I graduated in history with a minor in political science from Saginaw Valley State before deciding to go to law school.”

She ended up getting a full scholarship to the Cooley Law School in Lansing and getting her law degree. Along the way, she worked as a legislative assistant with the Michigan House of Representatives and realized she was most interested in learning how to improve laws.

“I kept falling back on enjoying that more and gravitated toward the public policy side of things,” she said. “I developed municipal skills and found that to be such an intriguing job. It’s extremely gratifying to be able to effectuate change and help more on a societal level. I enjoyed seeing how I could improve society as a whole and implement change.”

Her interest in serving in public administration led her back to her hometown of West Branch where she served as the city manager for five years. She has experience in getting state façade grants and in promoting economic development. “The city manager job fits so well with what I like to do,” she said. “It’s challenging but it’s a fun job that’s never boring.”

“I think my law experience helps me be a better city manager but probably not in the way people imagine, in a legal way per se,” she added. “The first two years of law school concentrated on developing our critical thinking skills, to look at an issue from a bunch of different angles. Strategic long-range planning was wired into our brains.”

Grace said she and her husband are looking forward to putting down roots in Buchanan. “Buchanan is a perfect blend of what we want, it has a nice small-town atmosphere, but larger communities aren’t that far away,” she said. “There are more opportunities for our children and we want the quality of life that’s here.”

She is looking forward to working with Marx the next several weeks before he retires. The two are already talking about using her experience and expertise on a number of projects.

“We have a wonderful collaboration and partnership, I think it will go swimmingly,” she said.

“I’m really impressed with the diversity of resources here with the cute downtown, the industrial park and the agriculture in the area which we see on display at the farmers’ market,” she said. “I know in my heart that Buchanan has really wonderful times ahead with everyone embracing that life is better here.”

NILES — When the leadership of Performing Arts Workshop announced its first merit-based scholarship, it was to do so in... read more