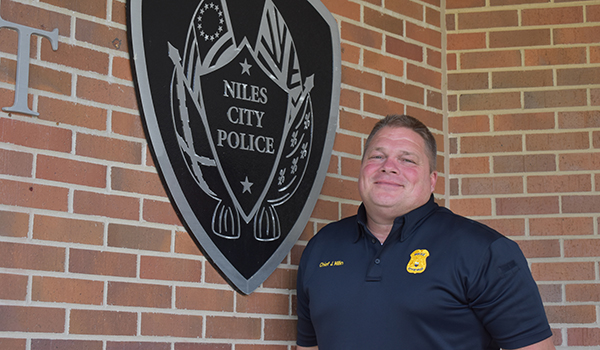 NILES — Niles Police Chief Jim Millin has held his current position since 2011. As Niles Fire Chief Larry Lamb moves into retirement on Oct. 1, Millin will move up into a position that bridges the two departments.

“You can’t take years of experience and cram them into 30 days,” Millin said of Lamb’s experience and training. “There will be quite a bit left to learn.”

The Niles City Council voted on Monday evening to appoint Millin as Niles public safety director. The position is new for the city of Niles.

As public safety director, Millin will take on the administrative role heading up both the Niles Fire Department and the Niles Police Department.

In a year that has presented multiple challenges from the impacts of COVID-19, the move will save the city’s budget around $63,000 when having one person do the job of two.

Millin said there was an increase in pay to take on the added responsibility, but it was not equivalent to an additional second salary.

“I’ve been a police officer all my life,” Millin said. “We decided that I would work with Larry for a little while to get a better understanding of the operations [at the fire department] day to day.”

Millin will begin splitting his time more evenly between the two departments, holding two offices so he can be on the ground at each location.

“I will rely on the exceptional employees we have here at the police department and the fire department,” Millin said. “Capt. [Kevin] Kosten here at the police department is phenomenal in his abilities and duties. I have absolutely no doubt that he will be able to oversee some of the day to day stuff. Likewise, at the fire department, Capt. Don Wise and Lt. Bill McCallister are just a wealth of knowledge and phenomenal employees as well. When you don’t have everything you need, you surround yourself with the people that have it.”

Originally planning to retire in February 2021, Millin was willing to take on the public safety director role when procedures in place at the fire department unraveled.

“There was a succession plan with the fire department for Larry’s [Lamb] departure,” Millin said. “Unfortunately, due to some medical issues, that’s not going to be able to take place. So [City Administrator] Ric Huff talked to me about the possibility of filling in as public safety director to give them more time to either search for another fire chief candidate or to see how things went.”

If things do go well, Millin may consider staying in the role past February.

“We decided that we would take this time from October to February and see if it’s the right fit for both me and the city,” Millin said. “My biggest concern is that I want to make sure this doesn’t affect either department negatively.”

As police chief, Millin handles administrative roles in the office, as well as occasionally making traffic stops, providing backup and assistance to officers responding to calls. He intends to also be on the scene of fires and be able to offer assistance and support at active scenes as well.

“My [new] job is to oversee the administration,” Millin said. “Setting policies, procedures, dealing with budgets, grants, federal and state grants, discipline, hiring, training, administration functions will fall to me.”

He has worked in the community as a police officer since 1991.

In his new role, Millin looks forward to continuing to work for and with the city of Niles.

“I’ve enjoyed my employment with the city,” Millin said. “The city has been great to work for. They take care of their employees. They listen to their employees. I don’t hear that with every municipal employer but it seems to be the case here in Niles.”