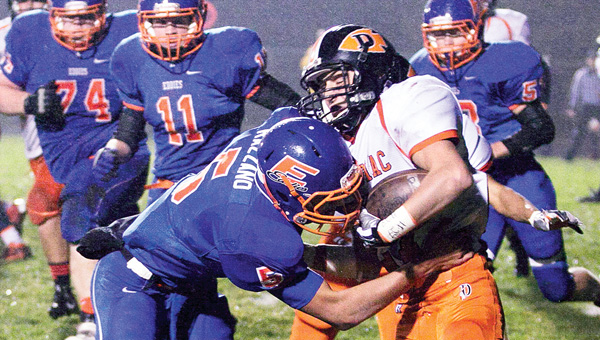 All six teams that Leader Publications covers are in action. Dowagiac, Niles and Brandywine are all on the road to open the 2020 season, while Cassopolis, Buchanan and Edwardsburg open the six-game regular season at home.

Here are brief capsules on those contests:

According to Edwardsburg Coach Kevin Bartz, the defending Wolverine Conference champion Eddies will have to figure out how to contain Bulldogs’ dual-threat quarterback Jacob Conklin.

“Conklin, Vicksburg’s dual-threat QB, poses a big challenge for all three levels of our defense,” he said. “Conklin is both an exceptional runner and passer. We will need to contain him and try to give up limited plays of 20-plus yards. The other challenge is that we don’t really know what else they have. With no scrimmage or games, we have not seen any film to help identify their strengths and weaknesses.”

Bartz said that he would have liked more time to ready for the season, but his team and the coaches will deal with it as best they can.

“Like most everyone else in the state of Michigan, we are not as prepared as we would like to be going into the first game,” he said. “Without a scrimmage to see our players in live ‘game-like’ situations, it is hard to evaluate how good or bad we really are. We are still in the evaluation process of determining how to best implement each of our players and where they fit into the schemes of our program. We have a lot of question marks at several positions. Hopefully, after Friday night, we will have more answers than questions.”

Bartz added that his team has worked so hard getting prepared for its opener that he feels they are “too exhausted” to waste energy on getting emotional.

“I think they know it is time to go to work,” he said.

Second-year coach Randy Brooks at Dowagiac said it has been tough getting prepared for the 2020 season. Add on to that the fact that the Chieftains are opening up against one of the best teams in the Wolverine Conference, makes it is an even bigger challenge.

“It’s been a real challenge trying to get prepared for first game with a three-week layoff in between,” he said. “We also didn’t have a scrimmage. With that said, we are happy to have the opportunity to compete.”

The Chieftains were 6-4 last season and qualified for the playoffs in Brooks’ first year at the program’s helm. Dowagiac lost several key skill position players. He will be counting on inexperienced players to fill many of those roles.

Brothers Connor and Kolby Hindenach will lead the Red Wolves. Paw Paw has a large and experienced offensive line, which has led many to believe that the Red Wolves have a shot at unseating Edwardsburg from the top of the league standings.

The Shamrocks’ new football complex is still awaiting final approval before teams can play at it.

So, tonight’s game between the Niles and Berrien Springs will be played on the turf at New Buffalo.

The Vikings are still trying to find the right combination to turn its program around. Niles has left the SMAC conference and is playing as an independent in football this season before moving to the Wolverine Conference in 2021.

Niles coach Joe Sassano said that a lack of practice has meant changing the game plan, at least for the opening week.

“As well as can be expected for nine days of practice,” he said. “Things will be simplified.”

Sassano said he and his staff have been so focused on Niles and what it needs to do, that he has not really spent much time worrying about the Shamrocks.

He said his team had done a nice job keeping everything in perspective.

“I think our kids have done a great job taking one day at a time,” he said.

No one knows how the players will react to having only a few family members in the stands each week. Sassano hopes that once the ball is kicked off, it will just be another game.

“[We] have not really thought about that,” he said. “I guess once the game starts we won’t even notice as we will be focused on coaching our kids.”

There have been a lot of changes since the Rangers last took the football field against eventual state champion Reading in the Division 8 district championship game last November.

Green and his staff have had to ride the roller coast of emotions throughout the summer as the Michigan High School Athletic Association has gone back and forth about playing football in the fall.

Gameday is finally here, and Green hopes his team is ready.

“We’ve been working hard for the past two weeks and are ready to see where we are at,” he said. “I think the biggest challenge is being able to make in-game adjustments to a team we know nothing about.”

Green said it has been difficult keeping the players from getting too hyped up before kickoff tonight.

“It has been challenging keeping the players emotions in check,” he said. “We just keep coaching focus and discipline in every rep that we do.”

Cassopolis players may feel somewhat different from other schools that take the field tonight when it comes to a limited number of fans sitting in the stands. The Rangers have always had great support from its fans, Green said.

“It will definitely be a little different playing in front of so few fans. We have such great support from the community, and the players feel and feed off of that,” Green said. “I hope fans are allowed at full capacity soon.”

The Bucks will be trying to build on the success they achieved at the end of the 2019 season under first-year coach Mark Frey. Buchanan won three out of four games down the stretch. The lone loss was a season-ending 52-38 shootout with its arch rival.

The Bobcats will get to open the season before the other schools in the Leader Publications coverage area as they face Wyoming Lee an hour and a half before the rest of the teams kickoff.

Brandywine coach Mike Nate was a loud proponent of keeping football in the fall. He got his wish when the MHSAA decided not to postpone the sport until the spring. Now the Bobcats face the reality of rebuilding a team that lost its all-time leading rusher in Jordan Abrams and its all-time leading receiver in Shane Brown.

Brandywine is fortunate to have starting quarterback Gabe Gouin for one final season. Gouin threw for 1,066 yards with 22 touchdowns, while he also ran for 556 yards and scored 10 times.

“There is no game plan. We just have to go by what we know from last year,” Nate said about preparing for Wyoming Lee. “There were no scrimmages or games to scout, so we are just taking a shot here with the game plan.”

Fans are reminded that players were given two tickets each for the game. No general admission tickets will be sold.