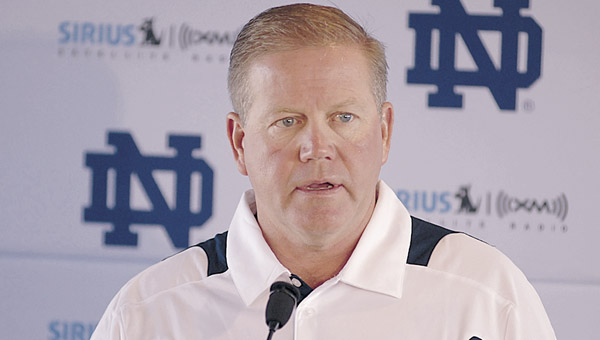 Notre Dame head coach Brian Kelly had his contract extended through 2024. It was announced at the end of the first quarter of the game against Duke on Saturday. (Leader file photo)

NOTRE DAME, Ind. — The University of Notre Dame and Head Football Coach Brian Kelly, the winningest active coach in NCAA Football, have agreed to terms on an extension that runs through the 2024 season, University Vice President and Director of Athletics Jack Swarbrick announced Saturday.

“We are pleased to be able to have Brian lead our football program for the foreseeable future,” Swarbrick said. “These terms were agreed upon in December and we planned the subsequent announcement for the Blue-Gold game in April. When the University transitioned to remote learning in March, we decided to wait to make this announcement until we were able to return our attention to football being back in action and I am happy to share this great news today.”

Entering his 30th season as a collegiate head coach in 2020 and his 11th year at the helm of the Irish program, Kelly is the only coach to win The Home Depot Coach of the Year Award (2009, 2012 and 2018) on more than one occasion. Kelly is the fourth-winningest coach in Notre Dame history, and his .735 career winning percentage trails only Nick Saban among active FBS coaches with at least 15 years of head coaching experience.

With five seasons in which he has totaled at least 10 wins (2012*, 2015, 2017-19), Kelly has matched Lou Holtz for the most 10-plus win seasons in school history. Kelly has led the Irish to a 33-6 mark over the past three seasons, their most wins in a three-year span since 1988-90, while only one Power 5 program owns a longer-active-winning streak than Notre Dame.

Kelly owns a 29-year career record of 263-94-2 (.735), has taken nine of his 10 Irish teams to postseason bowl games, including appearances in the 2018 College Football Playoff and the