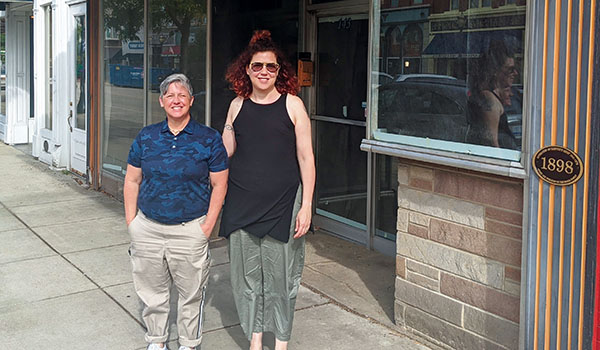 DOWAGIAC — A blighted downtown Dowagiac building will soon be as good as new.

Shannon Lyons and her wife, Cathy McBride, recently closed on the 143 S. Front St. building in downtown Dowagiac, with plans to turn the upstairs space into a high-end apartment and to renovate the commercial area on the first floor.

Renovations are expected to begin within the next two weeks.

“We’re excited to get going on it,” Lyons said. “We’re excited to help boost the downtown. We’ll be renovating both the interior and the exterior. It should make a difference to the facade.”

“A lot of activity has been happening downtown,” McBride said. “Activity begets activity. We’ve seen the work other businesses have done to their facades recently, and it’s exciting to be involved with that.”

Lyons and McBride are no strangers to the buying and renovating process. After more than 20 years of living in Seattle, the couple decided three years ago was time to move back to Lyons’ hometown of Dowagiac.

But what they discovered was a dearth of high-end apartment options in the Dowagiac area, especially downtown. So when the building at 115 S. Front St. became available for purchase, they went for it.

“We travel a lot for work,” Lyons said. “We didn’t want a house that would be hard to take care of when we were gone. We thought about apartments, but there weren’t many options for higher-end apartments. So we decided to buy one of the downtown buildings. The price was right, so we decided to make a go of it.”

Lyons and McBride renovated the two upstairs apartments, one for themselves and one for lease, as well as the downstairs commercial space that O’Larry Collins’ store, Art Enuh Suit, currently occupies. Lyons currently manages the renovations and rentals of their buildings, while McBride is a senior software engineer.

“We were concerned because we never owned either a commercial or rental property,” McBride said. “We didn’t know how to get people, but we ended up having people lined up before we bought the building.”

The city of Dowagiac acquired the 143 S. Front St. building in February 2019 and planned to sell. The building was the former home of Harvey’s Shop, a coffee shop and news stand that closed more than 30 years ago.

“We thought to ourselves, ‘we already did it once, so how hard could it be?’” Lyons said. “We thought that this town could support another high-end apartment.”

The purchase process started just as the COVID-19 pandemic began, which slowed down the process.

“The banks completely turned their attention to small business loans,” Lyons said. “It was understandable. For our financing, we knew what we were doing wasn’t a priority. They were taking care of the community.”

Lyons and McBride believe there is a market for higher-end apartments in the greater Dowagiac area.

“The city did a housing survey a few years ago,” McBride said, “It basically said that the city had many low-end apartments but not very many high-end apartments. We felt that interest was there.”

According to Lyons and McBride, the apartment at the 143 S. Front St. building will be approximately 1,800 square feet, with two bedrooms and two-and-a-half bathrooms. The two have tossed around the idea of a short-term lease of the apartment, such as an Airbnb, but believe long-term leases will be more in demand.

“There aren’t a whole lot of places to stay around here,” Lyons said. “We know we have the long-term rental that there is definitely an interest for [that].”

Throughout the renovation processes of their buildings, the two emphasized the importance of keeping business local.

“We have had such a good group of contractors,” Lyons said. “They understand our vision and our process. We try to keep our business local.”

“After living in Seattle and buying several houses in Seattle, we found it very satisfying that the money that we put into this building went directly to the people working on the building,” McBride said. “We were really happy about that.”

Lyons and McBride have also purchased the building at 113 S. Front St., which was the former home of Foodies Cafe and Catering.

“We don’t have a clear vision for that property,” McBride said. “But we’ll figure something out.”