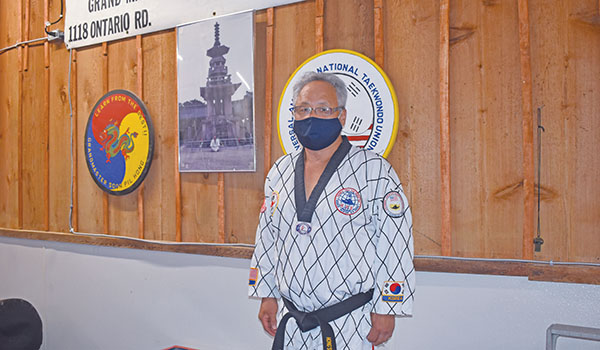 NILES — Over the weekend, several residents from Niles and beyond changed the color of their belts in a display of the five tenants of taekwondo: courtesy, integrity, perseverance, self-control and indomitable spirit.

Saturday, Hong’s USA Taekwondo Hapkido, 1118 Ontario Road, Niles, hosted its first testing day, and awarded its first black belt honors, for the first time since the onset of the COVID-19 pandemic. During testing days, students display the skills they have learned in an attempt to achieve a higher belt level. The highest level that can be reached is a ninth-degree black belt.

The studio’s grandmaster and owner, Soon Pil Hong, a ninth-degree black belt, said he was excited to see his studio filled again following closures associated with the pandemic.

“What we do is not about fighting; it’s about the five tenants. It’s about respect,” Hong said. “It’s a blessing. … We want to teach the younger generation not to hate, but respect and self-defense.”

Hong, who has been practicing Tae Kwon Do for 51 years, said he and his staff took all precautions to keep children and families safe during the testing day and during regular classes. He said taekwondo by nature allows for social distancing, as students need a 7-by-12-foot area of space to practice.

“We just want to follow the governor’s rules,” Hong said. “This is a big place. God has blessed me. For that reason, space is something we don’t have to be concerned about.”

Testing for second-degree black belt Saturday was John Johnson, 24, an instructor at the Hong’s USA.

“It’s a big achievement,” he said. “I’m kind of nervous, but excited.”

Eventually, Johnson said he hoped to make it all the way to a ninth-degree black belt, though he said it would take a lifetime for him to do so. Until then, he hopes to help the students of Hong’s USA find the same love for taekwondo that he has — and he is especially excited to do so after COVID-19 closures and disruptions.

“I came here three years ago, and it really changed my outlook on life. I wish I had started sooner,” he said. “It really sets you up to be a part of the community.”