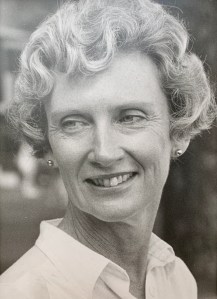 Mrs. (Helen Ann Luth) Mannion was born on April 27, 1935, in the Dutch West Indies on the island of Aruba, to Edith Rose Nugent and Collins Henry Luth, of Niles.

She graduated from St. Mary’s Academy, South Bend, in 1953. The following fall she entered the University of Michigan at Ann Arbor, Michigan. After obtaining a master’s in library science in 1970, she began a 25-year teaching career, finishing at the Maine Township East High School, Park Ridge, Illinois.

While in Chicago, Mrs. Mannion met the love of her life, John F. Mannion, of Oak Park, Illinois.  The couple were married in Chicago on March 9, 1982.

Mrs. Mannion became an avid Chicago sailor. She also loved to fish and learned to cast quite well in the northern Wisconsin lakes enjoyed by Mr. Mannion since childhood. During her many years in Chicago, Mrs. Mannion played competitive tennis, enjoyed attending the ballet and the Chicago Art Institute.

Mr. and Mrs. Mannion retired to Southern Pines in 1999, where Mrs. Mannion continued to play tennis and pursued a love of golf. She served on many hospitality committees at Knollwood Village and will be deeply missed by her friends there.

Mrs. Mannion is survived by her beloved husband of 38 years, John F. Mannion, of Southern Pines, North Carolina; her daughter, Mary G. Holt, of Washington D.C.; and her son, Robert Collins Holt and his wife, Christine, of Florence, Kentucky.

A memorial Mass will be on Sept. 11, 2020, at Holy Maternity Catholic Church in Dowagiac, followed by interment at the Riverside Cemetery.