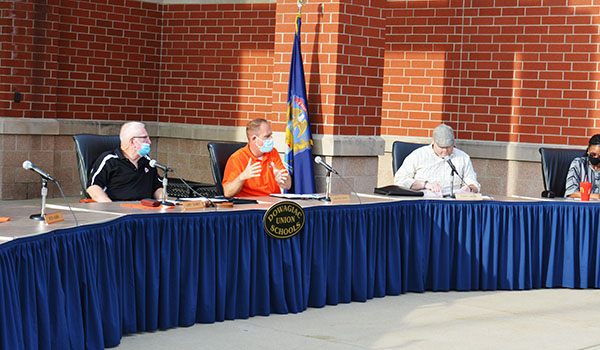 DOWAGIAC — All Dowagiac Union Schools students will start the upcoming school year in full-time distance learning during the COVID-19 pandemic, but board members say they are ready to open when it is safe.

The Dowagiac Union Schools Board of Education approved its COVID-19 Preparedness and Response Plan and its Return To School Plan Wednesday outside Dowagiac Middle School.

The school board unanimously approved the proposal to have all students, from kindergarten through 12th grade, learn from home on Chromebooks for at least the first five weeks of the school year.

The district will move the first day of school back from Monday, Aug. 31 to Tuesday, Sept. 8 to allow teachers and staff to prepare for distance learning.

“It’s become very clear to me that the board is going to wish to start the year with distance learning,” said Dowagiac Union Schools superintendent Jonathan Whan. “Because of that, I believe it is necessary to push the first day of school back from Aug. 31 to Sept. 8 to allow more time for us to work with staff in regards to the distance learning platform.”

The meeting provided parents and community members time to voice their concerns over issues like mask coverage for elementary schoolers, learning options for special needs students and the possibility for hybrid programs consisting of distance and in-person learning.

“I find it funny that the people that said six and four aren’t parents of schools currently in the district,” Groth said after everyone stated their preference. “Actually, I don’t find it funny. This topic matters deeply to me as someone who has a child in the district. I’m on the board, and I’m making the decision based on what’s best for all kids, and I have the perspective of a parent and so does Carrie.”

Groth proposed a five-week distance learning start with a reassessment after three weeks as a compromise, which the board unanimously agreed to.

“I think we need to understand that we all have family members in the community,” Sullivan said. “I have kids in every building who are close family. I think we all make this decision understanding that it is out of care for both our community and our kids.”

To prepare for school starting on Sept. 8, the district will take professional development days, originally scheduled throughout the semester, and use them during the week of Aug. 31.

Michigan Gov. Gretchen Whitmer’s MI Safe Start Plan has divided the state into eight regions based on COVID-19 risk level and assigns each region a reopening Phase from 1 to 6, with Phase 6 being post-pandemic.

Dowagiac falls under the Kalamazoo region, which is currently in Phase 4. Schools in Phase 4 are allowed to open for in-person instruction for more stringent required safety protocols. Phase 5 is deemed low-risk.

According to Dowagiac’s Return To School Plan, if the Kalamazoo region is under Phase 4 on Sept. 8, the first five weeks of school will be conducted by distance learning for all students in kindergarten through 12th grade. After three weeks of school, the district will reassess to determine if it will extend the distance learning or move into in-person instruction at the end of the original five weeks.

“If we begin the school year on Sept. 8, and three weeks later, things are looking good in our region, and we continue the end of that fifth week, we would move into in-person learning even though we’re still under Phase 4,” Whan said.

If the region moves to Phase 5 after the start of school, the district will move to in-person instruction within two weeks.

“Let’s say we’re three weeks into school, and the governor moves our region into Phase 5,” Whan said. “We can’t just flip the switch and go right into face to face. I personally think it would take at least a week but definitely be face-to- face within two weeks.”

If the school moves to in-person learning at any point, the district will continue to offer a virtual, cyberlearning experience throughout the full semester for families who do not feel comfortable sending their children back to school. Extracurricular activities, such as sports, band, choir and more, would be allowed to take place following the appropriate state and district guidelines for the first five-week distance learning period.

The Michigan High School Athletic Association will decide whether or not high school athletics will be fielded statewide on Aug. 20.

The Return To School Plan will be sent to the Lewis Cass Intermediate School District, which will then send it to the state. Whan said that the plan will be made public in its entirety following its submission.

“Every student in Dowagiac will have access to Chromebooks,” Whan said. “Grades kindergarten to 12th will be able to take Chromebooks home for distance learning.”

Whan noted that whenever the district moves to in-person learning that students from kindergarten to fifth grade will not be able to bring their Chromebooks home.

“We made the decision to order plexiglass to increase separation while kids are eating,” Whan said. “It wasn’t a requirement, but something as a district that we thought was another example of us trying to be as safe as we can.”

NILES — Dan Applegate walked 7 miles on Tuesday evening around the Niles High School track. He did not walk... read more