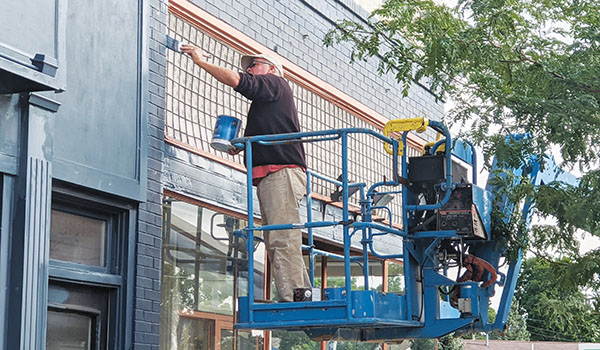 DOWAGIAC — A downtown Dowagiac business is in the process of receiving a facelift.

China Garden, 114 S. Front Street, Dowagiac, is having it’s front and side facades power-washed and repainted. The updates are made possible by the Downtown Development Authority’s Facade Incentive and Architectural Design Services Program, which continues to be used to rejuvenate downtown storefronts.

While many of Dowagiac’s downtown buildings have been renovated, there are some, like China Garden, which are showing significant wear and tear, such as rotting window trim, peeling paint, bricks in need of tuck pointing and, in some cases, faded and worn awnings.

When contractor after contractor said they were booked for the next six to 12 months, Vickie Phillipson, DDA and Greater Dowagiac Chamber of Commerce program director, asked former Front Street property owner Larry Seurynk for assistance.

Seurynk, who once owned and originally renovated these two storefronts and three others on Front Street 31 years ago, has been power-washing and painting the front facade of China Garden the past few weeks.

The incentive is administered on a matching funds basis. Property owners are eligible to receive up to $2,000 for front facade renovation. Double storefronts, like China Garden, may receive up to $4,000. If it is considered a major presence in the central business district, the Design Review Committee will also consider a secondary side of a building.

“The DDA has had a longterm impact on the community,” said Dowagiac City Manager Kevin Anderson. “The city and the DDA have been buying up parcels of land and turning them into city parks and redevelopment pieces. The city has been actively involved in rehabbing buildings and turning them into vibrant communities. We’ve kept the downtown much more vibrant than other communities of this size.”

China Garden manager Nicole Chen expects the painting to be finished in two weeks. She added that she would also like to renovate the dining area.

“We’ll try to get inside done as well because it’s too old,” Chen said. “We have lots of people asking about our dining area, which won’t be open. Since our dining area is closed, we can fix the inside of the building.”

SOUTHWEST MICHIGAN — Listed below are the unofficial election results from Berrien and Cass counties for the Aug. 4 primary... read more