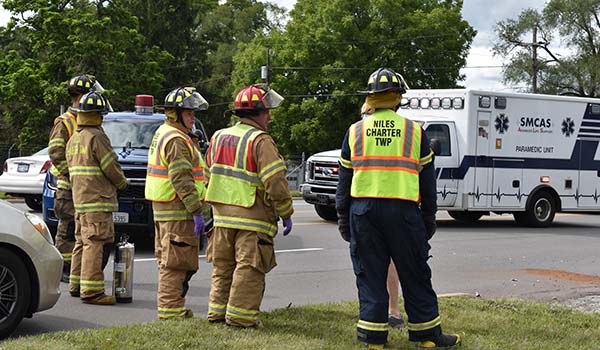 An accident between a motorcyclist and a pickup truck driver on S. 11th street in Niles sent the motorcyclist to the hospital with serious, possibly life threatening, injuries. Traffic was slowed on S. 11th Street in front of Michiana Rental, on the 3000 block of S. 11th Street. (Leader photo/CHRISTINA CLARK)

The incident occurred at S. 11th Street, near Stateline Road in Niles Township at 4:24 p.m. Lanes were closed to allow for investigation at the 3000 block of S. 11th Street.

When deputies arrived at the scene, they reportedly found a white Dodge pickup truck driven by Irving Duarte, 26, Elkhart. Duarte had been traveling southbound on S. 11th Street and was making a left turn.

“The driver of the pickup truck made a left-hand turn in front of the motorcycle, causing the collision,” said Berrien County Sheriff’s Department Lt. Joshua Sutherland.

Nieboer was transported to Memorial Hospital in South Bend for his serious, possibly life-threatening, injuries. Duarte was not injured.

Traffic was slowed on S. 11th Street for more than 30 minutes while crews on the scene waited for investigative teams to arrive.

According to deputies, drugs and alcohol do not appear to be a factor in this collision. The collision remains under investigation by the Berrien County Accident Investigation Team.