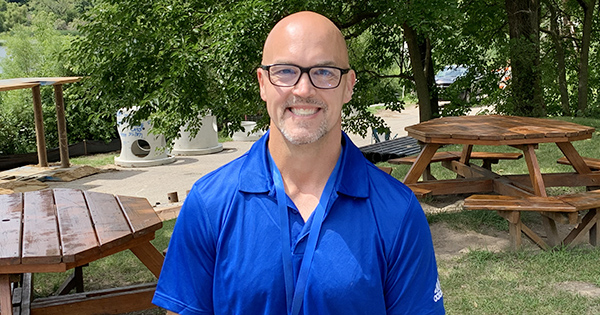 CASSOPOLIS — For the second straight year, Cassopolis will have a new athletic director.

Chad Gardner, a 1991 Dowagiac graduate, replaces Todd Pawielski, whose contract was not renewed at the end of the 2019-20 school year.

Cassopolis will be switching from a full-time athletic director to a part-time position. Gardner, who is currently a teacher at Niles High School, will continue working there. At the end of the school day, he will come to Cassopolis to handle the AD duties.

“It is going to be a challenge, but Cassopolis was very willing to work with me on that,” Gardner said Wednesday afternoon. “They know that during the day, I am a teacher and that is going to take priority. Plus, they have an assistant for me, and we will have a secretary that can field some of the questions that are asked. So, when I get in, I can take care of those. Having competent people around me is going to be the biggest asset.”

Gardner was not looking to become an athletic director. He said he was quite fine with teaching at Niles, where he has been for 22 years. But when the position came open, he decided to apply.

“Living in the area, I thought it was a really good way to give back to my new community,” Gardner, who moved to Cassopolis two years ago, said. “I just want to keep the great tradition at Cassopolis going. They have had great success, and part of that is the leadership that they have had.”

Besides being a teacher, Gardner also coached at the sub-varsity level at Niles. He always felt that being an AD would not be such a big stretch.

“When I finally got in and started looking at it, there are a lot of moving parts,” he said. “But it had not really entered my mind, but I thought it would be interesting, and it is. It is interesting because you are going to need to know what is going on with everybody.”

Gardner decided it would be a good fit because he feels his strengths are organization and communications. He also has a background with budgets after being a co-owner of a business long with his wife, Tammy.

“I thought it would be a really good fit,” he said.

Gardner did not have to look very far to get advice about his new job. Former Dowagiac standouts, including his former quarterback on the state championship football team, have become athletic directors who have been in their positions for many years — Greg Younger at Lakeshore and Brent Nate at Dowagiac.

“It was like going back home,” he said. “I have talked with both of them, and they are more than willing to help. It is a home type feel. They have always been great people.”

Pawielski also has offered up help.

Coming from athletic programs that achieved much success, Gardner is counting on those experiences to aid him moving forward.

“Being an athlete, I know what is expected of athletes,” he said. “It has changed some since I was in school, including some of the rules, but as far as knowing what it takes to have a winning program, that is instilled in me.”

Gardner will also have to separate himself from his days of being a coach to being in charge of the coaches.

“Taking two years off from coaching has helped me distance myself from it,” he said. “It was a situation when we moved to Cass that I was able to sit back and be a spectator. It was a nice break. Separating myself, I know that I am an administrator and the athletic director. Coaches know best, but if I see something is a violation of a rule, especially expressed by the MHSAA or the district, I will step in and we will have those conversations.”

Gardner added that since most of his coaches are experienced, he expects things to go pretty smoothly.

Gardner, being someone who likes routine, will have to learn to deal with the fact that every day will be different.

“You should always have a backup plan,” he said. “You always have a plan ‘B.’ This is the way plan ‘A’ should go, but it didn’t, so here is plan ‘B.’ We have to make adjustments on the fly and that is going to make me stronger.”

Gardner said that Cassopolis is still in the process of replacing volleyball and softball coach Demi Schrader, who resigned at the end of the school year. The COVID-19 pandemic and school being closed due to it have slowed down the process.

INDIANAPOLIS — NCAA Division III championships in fall sports for 2020-21 are canceled. With the health and safety of the... read more