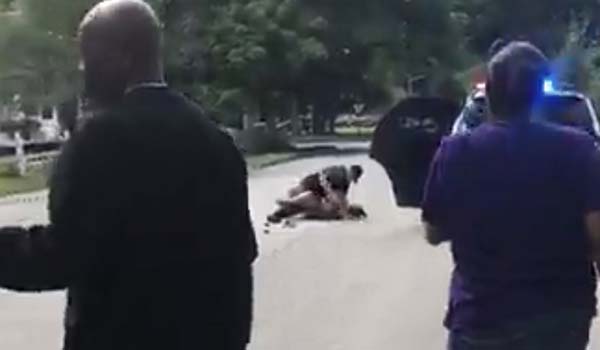 In a screenshot from a Facebook Live video posted by Yolanda Robinson-Grant, a Berrien County Sheriff’s Department Deputy is seen arresting an unidentified woman. (Submitted)

NILES — An arrest turned into a physical altercation in a Facebook Live video recorded in Niles on Tuesday afternoon.

In the video, which begins after a Berrien County Sheriff’s Department deputy has taken a woman to the ground, the woman can be heard yelling for help. She is seen trying to get the officer off her back before she is wrestled flat to the ground. The deputy has the woman face down on the street, straddling her body, he continues pushing the woman’s head toward the ground as she cries to the officer and neighbors watching. The officer is heard in the video telling her to “stop fighting.”

The deputy is not identified in the video.

“I am not fighting, you are on me,” she responded.

The incident, which occurred on Michigan Street in Niles, was filmed and posted by Yolanda Robinson-Grant, who can be heard in the video saying she is from South Bend.

It is not known what the woman was being detained for. Minutes into the video, Niles Police Department deputies arrive.

Voices of onlookers in the video can be heard saying the woman had been detained in the Berrien County Sheriff’s Department officer’s vehicle for 30-45 minutes prior to the use of force occurring.

“It occurred,” said Berrien County Sheriff Paul Bailey. “Everything is being forwarded to the prosecutor’s office. I have not gotten anything back yet, so there is nothing I could comment on.”

Bailey confirmed the woman in the video is currently in jail. The identity of the officer was not released.

“We’re going to look into this like we do with all use of force,” Bailey said.

SOUTHWEST MICHIGAN — Listed below are the unofficial election results from Berrien and Cass counties for the Aug. 4 primary... read more