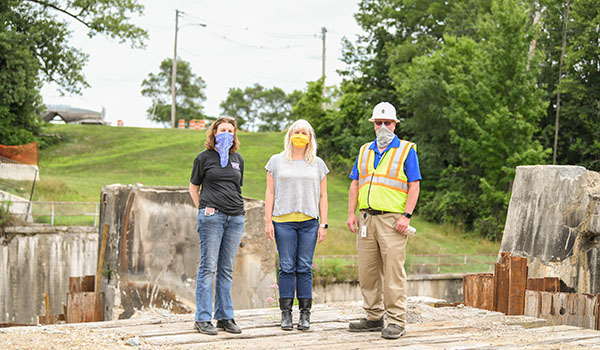 NILES — The Pucker Street Dam structure is shorter than it was at the end of April.

The manual gates from the dam have been removed, and the Dowagiac River flows a little more freely. The riverbed beneath still contains structure to be removed before it will return closer to its original state.

Losensky Park is now closed to the public due to the continued demolition work and drawing of the river. The project is visible to those driving across the bridge on Pucker Street, though the work goes further upstream the Dowagiac River. The process continues in removing sediment buildup from the years the dam has been in place, and drawing the river 6 inches at a time away from M-51.

At a biweekly construction meeting, hosted Thursday afternoon, representatives from many facets of the dam project were in attendance. Local historians from the Niles History Center, Christina Arseneau, director, and Mollie Watson, assistant director, were in attendance to hear what the work crews had found.

The Pucker Street Dam generated energy to Niles in the late 1900s. The current removal has focus on restoring the riverbed and the free flow of the river, benefiting fish species such as the steelhead, Chinook salmon, coho salmon, brown trout, white suckers and walleye, according to the city of Niles webpage for the dam.

As the dam has been deconstructed, Suzannah Deneau, project engineer with Wightman, and Jeff Dunlap, utilities manager for the city of Niles, have found some unexpected items along the way.

During the meeting, Deneau showed attendees some of the bottles found along the shores of the river as the level had gone down nearly 10 feet as the dam’s removal continued.

Arseneau recognized a few of the bottles. One denoted its origins from the Niles Creamery in the late 1930s.

Deneau’s crew also found a message in a bottle that had been stopped by the dam.

The letter inside was written by two boys, aged 11 and 12.

As the Dowagiac River’s levels have gone down near the site of the Pucker Street Dam, as water more freely flows, signs of another piece of history have emerged.

“We’ve gone down about 10 feet,” Dunlap said, indicating an exposed steel beam with a red paint mark on it.

Another piece of history has been uncovered through the projects: the Eli Ford Legacy Dam.

“We only knew of the Eli Ford Dam through Berrien County history books,” Arseneau said.

According to Arseneau, in the publication “Twentieth Century History of Berrien County,” Ford’s mill was the first water powered mill in the region in 1828.

“According to the same report, the grist mill brought a lot of business from farmers in Pokagon, Beardsley and other communities in Cass County,” she said.

The mill likely served an essential function as well as a social function.