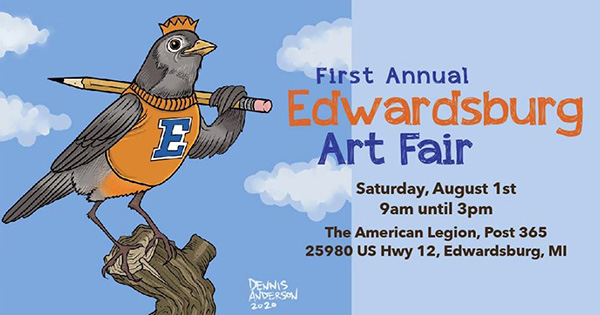 The show will run from 9 a.m. to 3 p.m. in the parking lot of the American Legion and is expected to draw several well-known Michiana area artists according to the event’s organizers. The fair is being sponsored by the Edwardsburg Vision Board.

The fair will feature more than 30 vendors displaying their arts and crafts, including original art, prints, jewelry, pottery and more. Food and beverages will also be available for purchase.

The art fair is a free event.

Among the artists will be Neil Benham, Dennis Anderson, Diane Beecher, Jim Lothary and Judy Ladd.

“We are actually going to have local artists, who are professional artists, and artist who do it on the side,” Grove said. “We are having jewelry, ceramics, work working, graphic designs and watercolor paintings.”

Grove said many of the artists would be familiar to those who attend the show. A list of some of the artists can be found on the event’s Facebook fan page.

The art fair is the result of suggestions from Michigan State’s School of Planning, Design and Construction as part of the Edwardsburg Vision Board’s three sessions with community members about creating a more viable, attractive and welcoming community.

From those sessions, an event committee was formed, which is headed by Gail Campanaro. Along with Sherry Sayles and Christine Grove, she has worked hard to make the art fair a reality, said Grove.

The Vision Board is already looking beyond the fair.

“We would like to implement some of the suggestions that were made by Michigan State for improving the ‘uptown’ area,” Grove said. “Another committee that came out of that was the Safe Routes to School. They want to make Edwardsburg more accessible with walking and sidewalks and bicycle routes.”

The suggestions from MSU and the Vision Board’s work will hopefully lead to a “downtown” area for Edwardsburg.

“They gave us ideas for improving and hopefully putting together a downtown where people will want to come and hang out,” Grove

NILES — The decision has been made to have the Niles City Golf Tournament at Plym Park later this month.... read more