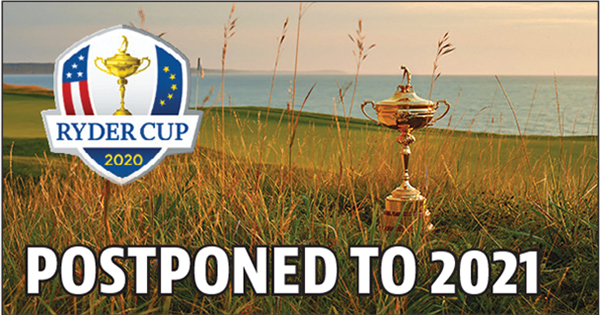 The Ryder Cup was to be played Sept. 22-27 at Whistling Straits in Kohler, Wisconsin, while the Presidents Cup was set for Sept. 30 through Oct. 3 at Quail Hollow Club in Charlotte, North Carolina.

“Unlike other major sporting events that are played in existing stadiums, we had to make a decision now about building facilities to host the 2020 Ryder Cup at Whistling Straits,” said PGA of America CEO Seth Waugh. “It became clear that as of today, our medical experts and the public authorities in Wisconsin could not give us certainty that conducting an event responsibly with thousands of spectators in September would be possible. Given that uncertainty, we knew rescheduling was the right call. We are grateful to PGA Tour Commissioner Jay Monahan and our partners at the Tour for their flexibility and generosity in the complex task of shifting the global golf calendar.”

The decision to cancel the Ryder Cup was based on guidance from the Centers for Disease Control and Prevention, along with state of Wisconsin and Sheboygan County health officials.

“These two premier international team events are lifted by the spirit of the fans,” Monahan said. “With the uncertainty of the current climate, we fully support the Ryder Cup’s decision to delay a year in order to ensure fans could be a part of the incredible atmosphere in Wisconsin, and the delay of this year’s Presidents Cup was the right decision in order to allow for that option. We are thankful that our global partners, our friends at Quail Hollow Club, our long-time annual title sponsor in Charlotte and all associated with the Presidents Cup and the Junior Presidents Cup have approached this change with a unified, positive spirit. We are confident the move will give us even more runway as we bring the Presidents Cup to Charlotte in 2022.”

The Presidents Cup change allows the Wells Fargo Championship to be played at Quail Hollow this year, but it will move to TPC Potomac un 2022.

Conner Nelson is a senior on the Edwardsburg baseball team. Activities: Baseball, football and basketball. Hobbies: Hanging out with friends... read more