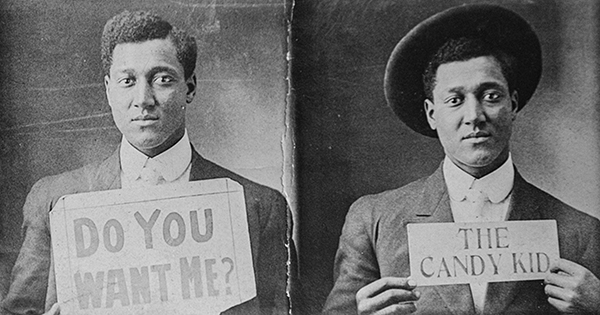 Pictured is one of the photos that came in an album purchased by the Underground Railroad Society of Cass County of Calvin Township and Vandalia residents. (Photo courtesy the URSCC)

VANDALIA — In early June, a member of the Underground Railroad Society of Cass County saw a photo album of African Americans from Calvin Township and Vandalia for sale on eBay.

The photos dated back to the 1850s and included many tin-type photographs. It did not take long for the members of the URSCC to decide they would like to purchase the album to be put on display at the Bonine House and on its website.

The original asking price was $2,500. Cathy LaPointe, treasurer of the URSCC, contacted the members to gauge their interest in purchasing what she considered a priceless item. The members agreed, and LaPointe began the back and forth process of bidding and counteroffering for the album.

When all was said and done, the album was purchased for $1,380, which included shipping.

“Somebody saw it on eBay, and he belongs to a history group and he posted it on there and two of our members called me,” LaPointe said. “We decided we would try to get it. I did not see it on eBay. I tracked to a book store in Aiken, South Carolina. For some reason, it was on there. I initially contacted the owner of the bookstore and just left a message.”

LaPointe shared the story of the URSCC and asked if the owner would like to donate the book in her message. She did not hear back from the owner.

“I first put it out to our members,” she said. “We have about 400 members, and I said, ‘what do you think?’ A lot of people came back right away that they were in. First, I countered $750, which was flat turned down. But they came back at $1,250. We had enough pledges. I thought I am not going to take a chance on losing this. I accepted that offer.”

The album arrived a couple of days after finalizing the deal.

Once in its possession, member Stacy Lankford offered to photograph the album and scan the pages so everyone could see and share the photos LaPointe said.

“There were enough Calvin Township names, plus two of the churches — one in Vandalia and then Calvin Chapel — we knew it was important to us. Stacy is a crackerjack photographer. He is really good at it. He took individual pictures of all the pages and then sent them to URSCC member Lin Pollard, who is our webmaster. She formatted them for our website.”

LaPointe said she teased the photos on the group’s Facebook fan page and, within three days, had 15,000 views.

“People are recognizing their relatives,” she said. “If somebody contacts us through the website, we will publish all those messages so people can see them.”

LaPointe said there has always been a plan to do a display on Calvin Township.

“It has been such a focal point for this story,” she said. “The album will be in a locked case, but all of Stacy’s photographs will be in an album for people to see. There will also be a place for them to write their relationship or their stories.”

For those who cannot wait to get to the Bonine House, photos can be viewed by going URSCC.org and clicking on the link call family album.

VANDALIA — Mid-July has meant Underground Railroad Days in the village of Vandalia since 2010. However, this year will see... read more