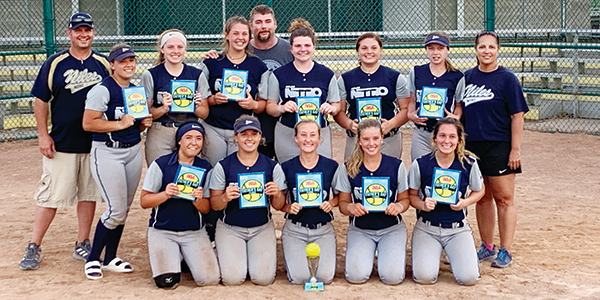 Niles Nitro 16U pick up win in Lakeville tourney

LAKEVILLE, Ind. — The Niles Nitro 16U travel softball team went 5-2 to win the 18U Division of the Father’s Day Classic Tournament in Lakeville, Indiana over the weekend.

The Nitro defeated Kalamazoo Kings 18U to win the championship 14-3. In the semifinals, Niles defeated the Kings 11-0 to force a second title game in the double elimination tournament.

The Kings handed the Nitro a 2-0 setback in the opening game of the tournament. The Nitro defeated Prestige None 18U 5-2, lost to the Kings 3-2 and defeated Prestige Travel 18U 7-0 to advance to the title game.

In the championship game, Niles banged out 13 hits as Sophia Lozmack was 3-for-4 with two RBI, while Olivia Elliott, Sierra Carpenter, Gabriella Kovac and Avianna Hellman all had two hits and combined to drive in five runs.

Kovac had a double and Carpenter a triple for the Nitro. Lozmack was the winning pitcher in relief of Elliott.

In the semifinals, Niles finished with 13 hits, including a 3-for-4 performance, including a double, from Hailey Robinson. Elliott and Kaitlyn Klopenstine both finished with two hits. Olivia Robinson, who homered, drove in three runs. Elliotet and Lozmack both doubled.

Lozmack went the distance to earn the victory as she tossed a four-hit shutout.