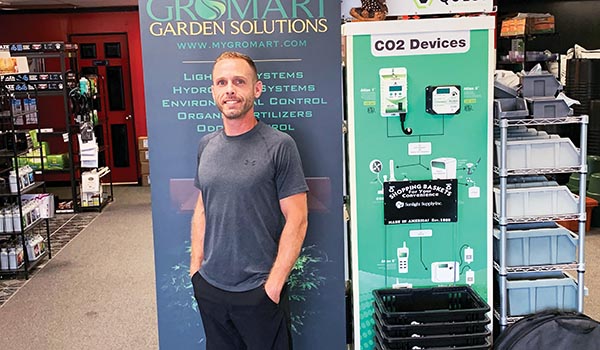 EDWARDSBURG — With the legalization of recreational marijuana and the COVID-19 pandemic, hydroponic businesses like GroMart in Edwardsburg and the Green Iguana in Cassopolis have seen their businesses take off.

“It still took a while,” he said. “It took almost a year before I really saw an increase with that. Honestly, the real boom has come from coronavirus, which is crazy to say.  February, March and April have been the busiest months I have had in eight years.”

Those numbers also include the regular gardeners who were coming in to get their supplies to get ready for the growing season.

Despite recreational marijuana shops opening in the area, Thompson feels it will not affect his sales.

“We will see pretty much everything stay the same if not increase,” he said. “As we all know, people have lost their jobs, and there is a high unemployment rate, so people are trying to save money, whether that is growing their own food at home or growing their own cannabis. If they are medical marijuana patients, they can grow their own at home. In the summer, you can use Mother Nature and the sun to grow your own, and you do not even have to go to those stores.”

Thompson added that people realize the cost of purchasing is pretty high at a store, plus the taxes they have to add to that cost.

As far as people coming in to grow their own food during the COVID-19 pandemic, Thompson said he is selling a lot of seeds and fertilizer. Customers were able to get their seeds going, and now that the chances of frost have decreased, gardeners have begun planting outside.

Once the 2020 growing season starts to come to an end, Thompson believes people will continue to want to grow their own food.

“I think that is going to be more present as we head into the summer here,” he said. “Everybody is going to be trying to take care of themselves one way or another, whether that is growing their own food or growing their own medicine. It could be any type of medicine. There are a lot of medicinal plants that people do grow in their gardens. People are trying to avoid going to the doctor or the natural food store. They would rather grow it at home.”

Nate Purucker, owner of the Green Iguana, agreed with everything Thompson had to say.

“My business is probably four times what it was when I started,” Purucker said. “Some people are growing their own stuff, but people being able to grow recreational cannabis helped, too.”

There really is no difference in the equipment needed to grow food or marijuana, the shop owners said.

“Generally speaking, it is the same,” Purucker said. “There are some differences depending on what you are growing, like blueberries need a more acidic soil blend.”

Costs vary depending on how the customer wants to set up their hydroponic system.

“You can use simple pots, soil and nutrients or you can do flood tables or deep-water culture buckets,” Purucker said. “It depends on what type of hydroponic growing you do. You can do it cheaply, or you can spend a lot of money.”

For more information on starting a hydroponic garden, visit their websites at mygromart.com or greeniguanahydroponics.com.

CASSOPOLIS — One newly formed committee is hoping to make a change in Cass County — one conversation at a... read more