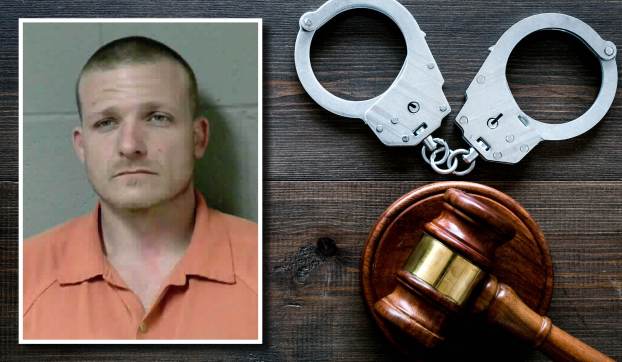 Patrick McMeeken, 32, of Garrett Road in Dowagiac, appeared via video from prison where he is serving a separate prison term on drug and weapons charges. In the bomb threat case, he had pleaded guilty in May before Friday’s sentencing to false report or threat of terrorism, use of a computer to commit a crime and conspiracy to obstruct justice.

He was sentenced to four to 40 years in prison last summer on the drug and weapon charge. In the current case, McMeeken has credit for 371 days already served. Restitution for the costs associated with evacuating the building and conducting a search for a bomb was not ordered Friday but could be ordered at a later date.

“He’s 32 years old and has made a mess of his life so far,” said Cass County Prosecutor Victor Fitz. “He was trying to mess with the system so he could get messed up on drugs. He knows what he needs to do. He should be feeling fortunate that his attorney made a really good deal which is slightly under the guidelines.”

”If he had a time machine, I’m sure he would go back and make a different choice,” said defense attorney Robert Drake.

McMeeken agreed, saying that now that he is clean and sober, he sees that he made some “stupid decisions.”

“You better thank your lucky stars for the plea agreement,” said Judge Herman. “I can assure you this. With the time and resources wasted, I would have sentenced you much higher at around 10 years and consecutive to your current sentence.”

“It’s no laughing matter when you do something like that,” he added. “Just a few minutes of fun and laughter caused you another six years in prison. A few minutes of foolishness caused you a big portion of your life. You’re still a young man and will still be fairly young when you get out. Hopefully you will address your addiction issues. You have a lot of life still left to enjoy.”

Another Dowagiac man was sentenced to prison for resisting and obstructing police.

Jason Ottinger, 26, of Dowagiac, pleaded guilty to two counts of resisting and obstructing police and was sentenced to 27 months to three years in prison with credit for 146 days already served. He must pay $1,548 in fines and costs. He was out on bond Friday and ordered to turn himself in Friday afternoon.

The incident occurred Oct. 26, 2019, when he went to the Dowagiac police department with a complaint that he had been banned from the Harding’s market after stealing items the day before. He was arrested and struggled with police both then and at the jail.

Fitz noted that Ottinger has 20 previous criminal convictions dating back to when he was a juvenile.

“He not only has a lot of convictions but ones with a consistent and disturbing pattern of malicious destruction of property, resisting police, domestic violence, possession of drugs and assault and battery,” he said.

Defense attorney James Miller argued that a lot of Ottinger’s problems stem from not only his drug problems but his need for a hearing aid.

Judge Herman noted that Ottinger has been in court a number of times over the last five years with probation sentences never working and ending up with him serving jail terms.

“When I look at your record, you’ve spent the better part of the last five years in jail because you won’t cooperate with police,” he said. “I don’t see another year in jail working for you.”

The incident occurred Feb. 13 in Dowagiac. Carnes’ blood alcohol level was .306, nearly four times the legal limit. She can serve the rest of her jail term at the end of her probation and her sentence may be reduced to a second offense drunk driving if she successfully completes probation.

The retail fraud incident occurred Dec. 4 when he stole steaks and shrimp from the Dowagiac Harding’s. He was arrested Dec. 13 after a traffic stop and the drugs were found when he arrived at the jail.

DOWAGIAC — With the passing of a gavel Thursday afternoon, a local club and volunteer organization is looking forward to... read more