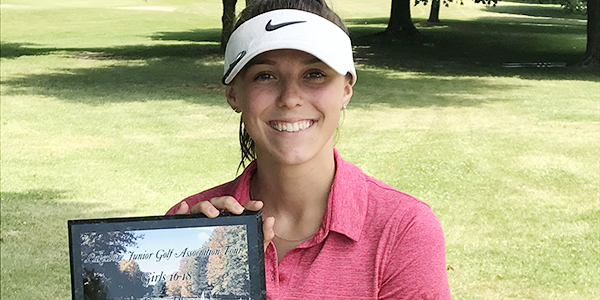 DOWAGIAC — It had been quite some time since Greta Whitaker had competed in any type of sport.

The layoff did not seem to affect her as she captured the second stop on the Lakeshore Junior Golf Association Tour at Hampshire Country Club last Thursday.

Whitaker, who said she has been on the golf course a lot this spring, shot a career-best 80 to win the Girls 16-18 Division. Her score was second only to Carter Geigley, of Centreville, who won the Boys 16-18 Division with a 77.

Both Whitaker and Geigley will be freshmen at Bethel University this fall.

“I didn’t know I did that,” Whitaker said about finding out she had the second-best score in the entire field. “That makes me feel better about what I did. That was the best I have ever shot, so I was pretty excited about it.”

Whitaker was happy to be back on the links and competition.

“It has been so long since I had any competition in anything,” she said. “It was just great to get out there and play for something. It was amazing.”

Whitaker also said that the competition is helping her prepare for the collegiate golf season.

Geigley has not challenged in his division either as Parker Lanning, of Watervliet, shot 99 to finish second and Nathan Marohn, of Stevensville, was third with a 101. Dowagiac’s John Bontrager shot 121 to place fourth.

Cassopolis’ Alan Wegner shot 81 to win the Junior Division title. Joey Berry, of St. Joseph, was second with an 85, while Conner Geigley, of Centreville, finished third with an 86. Niles’ Dean Wegner placed fourth with a 94.

The tour opened play with a limited field at Pine View Golf Club near Three Rivers on June 17.

The tour moves to Paw Paw Lake Course on Monday and then to Lake Cora Hills near Paw Paw on Thursday.