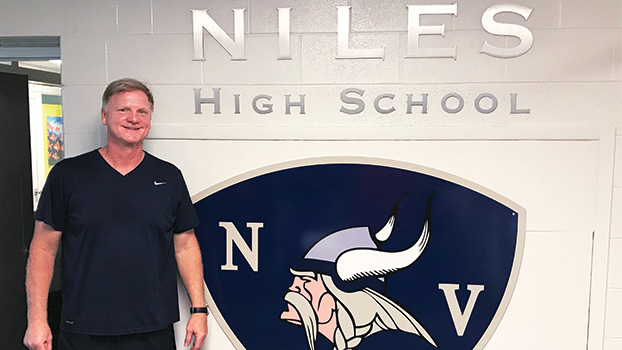 Niles boys basketball coach Patrick Touhey was looking forward to competing in the BCS, but is equally excited that the Vikings are moving to the Wolverine Conference. (Leader photo/SCOTT NOVAK)

NILES — Once the invitational from the Wolverine Conference arrived to join the league, Niles Athletic Director Jeff Upton met with his coaches to break the news.

It was last fall when Upton had a similar meeting with his coaches to discuss the Vikings move into the BCS Athletic Conference for the 2020-21 season. Niles will join the Wolverine Conference in the fall of 2021.

Three of the coaches who will get their first crack at the new competition in the fall of 2021 — Joe Sassano, Jenny Nate and Abel Fonseca — are ready for the challenge.

“I am excited about this opportunity,” said Sassano, who coaches the Vikings football team. “Being in the Wolverine will give us a quality schedule with a 10-team conference. We will have a consistent schedule year after year.”

Nate, who coaches the Niles volleyball team, is already familiar with many of the Wolverine Conference teams.

“We are looking forward to joining the Wolverine,” she said. “It’s great competition, excellent rivalries and closer to home.”

Fonseca has coached in Edwardsburg. The Niles boys and girls soccer coach knows exactly what Niles is going to face.

“The Niles soccer program is very excited to be joining the Wolverine Conference,” he said. “We look forward to the competitiveness of the conference and the new challenges it will bring. Renewing local rivalries is a nice added bonus.”

Niles boys basketball coach Patrick Touhey was looking forward to competing in the BCS, but likes the Wolverine as well.

“Although we were looking forward to being part of the BCS and playing the strong competition it provides, we are just as excited about being part of the Wolverine Conference,” he said. “It will continue to allow us to play very strong competition, with some geographically local teams that create fun rivalry games. I believe our inclusion is a great addition and will be a great lift for our program for the foreseeable future.”

Niles girls coach Jessica Johnson is familiar with the caliber of competition as the Vikings have faced Edwardsburg and Three Rivers for several years as non-conference foes.

“We have had some very close games in recent years with both Edwardsburg and Three Rivers,” she said. “I look forward to facing them both twice a year, along with Dowgaiac and Sturgis, prior to seeing them in the MHSAA tourney.”

NILES — Organizers hope a march planned for Friday evening will be just the beginning in a local movement, and... read more