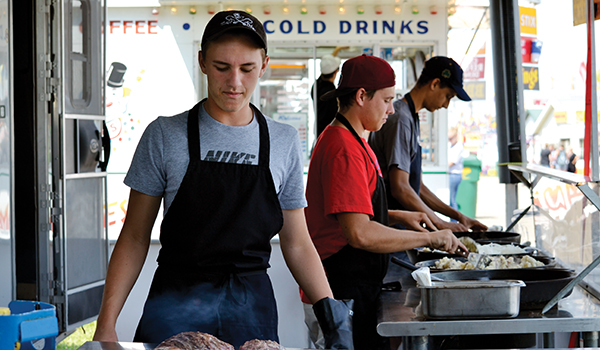 Cass County Fair Board President Brian Kuemin said Thursday afternoon that the fair is still scheduled for Aug. 2 through Aug. 8. He also said that the board is also looking at alternative plans should hosting a traditional fair not be an option.

In the meantime, the board wanted to help out its vendors who have lost work due to the COVID-19 outbreak, and help the fair raise money to continue to bring Cass County the best entertainment possible.

The fairgrounds are used for events outside of fair week, so it has lost money during the stay-at-home orders that have been in place in since March.

“We have lost horse shows and weddings,” Kuemin said. “So, we are losing revenue as well by all of this. I hope the public appreciates it and comes out and enjoys some fair food. I hope our vendors can make some money to help them out.”

Other fairs have already hosted drive-thru fair food events or have one planned.

“Last week, a friend of mine went up to Ionia where they were having one, and it was a four-hour wait,” Kuemin said. “We are bringing in eight vendors, so hopefully there won’t be that kind of a wait.”

Kuemin said the board tried to give people a variety to choose from, while also making sure there were not too many vendors. Organizers did not want to dilute it so much that vendors did not make some money.

He also said that this might not be a one-time event for the fair this year. Having additional drive-thru events would allow the board to bring in different vendors, which would allow them to help as many people as possible, especially as many of them are long-time participants at the Cass County Fair.

“From what I have seen on Facebook, the community is excited about it coming in,” Kuemin said. “I have never seen so many shares. This whole thing took off so fast. Hopefully, it benefits a lot of people.”