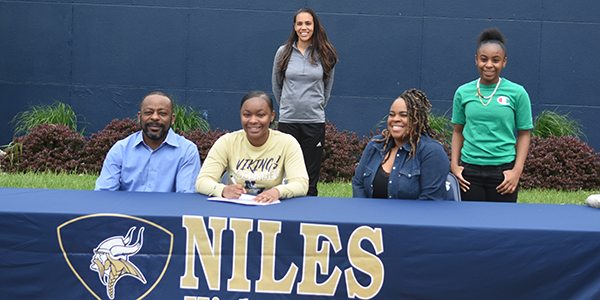 NILES — The all-time leading scorer in Niles girls basketball has decided to continue her academic and athletic career at Kentucky State University.

Alycia Patterson, who scored 1,216 in her four-year varsity career, signed her national letter of intent Wednesday afternoon to play basketball at the Division 2 school located in Frankfort, Kentucky.

Western Kentucky is scheduled to move up to Division 1 for the 2021-22 season.

Patterson said she attended a basketball camp at Kentucky State last year where she received an offer from the school.

“It was not as big as the other schools, plus they have a good nursing program, and that is what I want to go into,” she said. “Since I was offered, I got to go around the campus and see the dorms and things. It was really nice.”

Niles wrapped up its basketball season before the Michigan High School Athletic Association suspended, and then ultimately, canceled sports for the remainder of the 2019-20 season.

Patterson has been keeping herself active and getting ready for when she has to head to Kentucky during the state’s stay-at-home orders.

“I have been doing this workout I found on the internet,” Patterson said. “I have been running, and I have still been playing basketball because we have a hoop at my dad’s house.”

She said she has also been fortunate to have a sister, Kamryn, who will be a junior at Niles this coming fall, to work out with.

“We have been playing one-on-one sometimes,” Patterson said.

Patterson is the daughter of Kristen and Anthony Patterson.