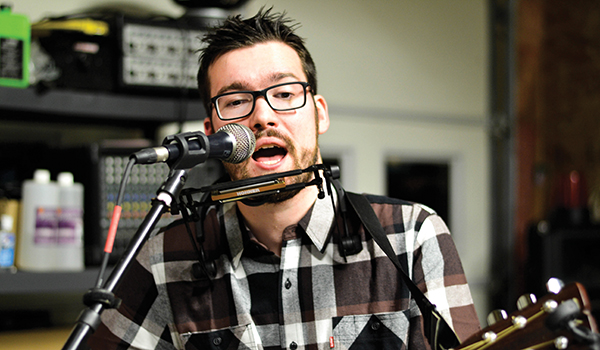 NILES — Music venues remain silent and empty as the heavy mandates against people gathering have been put in place by state governors. However, the music has not died. It has moved to a different place to keep everyone a little safer — online.

Collin Mattiford, of Niles, has been working on his music a little differently lately. Mattiford is the bassist and one of the vocalists for Niles-based band The Erly. Playing American indie rock around the area, The Erly can usually be found playing at venues like The Well and LaSalle Kitchen and Tavern in South Bend, and Ignition Music Garage in Goshen.

Their last live performance together as a band was on March 7 at LaSalle Kitchen and Tavern, and while it seems like long ago, less than a month has passed since the social and artistic landscape changed drastically.

“One of the biggest things is that we were in the middle of recording our next album,” Mattiford said of The Erly. “Unfortunately, that had to be put on hold because we’re not able to travel. The good news is that we’re about 70-percent done with it, so we don’t have a whole lot left to do.”

Still, the sudden stop in momentum has had the band pivoting to their next moves. Like many, the band is using video chats to continue checking in with one another.

“Currently, we are working on at least the artwork for the album. At least we’ll know what we want when we get back to recording,” Mattiford said.

The shift in attention has also led to some other performances in the online space, as live performances were canceled.

Mattiford performed solo in Michiana Bar Aid. The Facebook Live Streaming event was hosted by Music for a Cause to help raise money for bars, restaurants and venues in the Michiana area that have worked with musicians in the past. On April 4, Mattiford performed his set from his garage. He chose to perform solo because there was no safe way to get The Erly together to perform in one place, and video streaming would not keep them all together, timing-wise.

“I think I had done a Facebook Live one other time before,” Mattiford said. “Nothing that intimate really. It was fun, I had my whole set list planned out. Between songs, I mentioned to donate to Michiana Bar Aid. I enjoyed it.”

The major difference between performing live online, and live in person, is that the energy is not the same, Mattiford said.

“With live video, you can only see that people are watching, you can’t see them as they see you,” Mattiford said. “I kind of treated it as if I was just playing in a coffee shop. Not a whole lot of interaction, per se, just focusing more on the music and some brief talking in between.”

As events for The Erly have been canceled as far out as July, with the National Association of Music Merchants, also known as NAMM being one that they had planned on attending, the band looks forward.

“We are just looking forward to getting back into doing things, honestly,” Mattiford said “Right now, we are shifting our focus onto other aspects of our album. When the time comes to finally meet back in person, we’ll get back into recording.”

The band has some shows planned in August, and members hope to be back to working together at that point.

In the meantime, the band has been posting videos to their Facebook of times practicing and playing together in the past, as well as musical equipment rundown videos, to stay in touch with their audience.