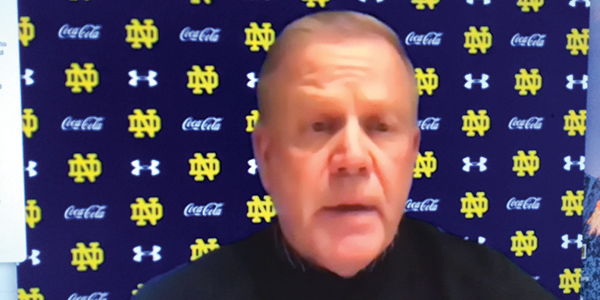 NILES — Brian Kelly and the Notre Dame football team are supposed to be going through spring practice in preparation for the annual Blue and Gold Game.

Instead, the Fighting Irish football team is scattered around the country doing individual workouts while hosting virtual meetings with the coaching staff due to the COVID-19 pandemic.

Kelly hosted a Zoom teleconference with the media on Wednesday to discuss a variety of topics, including when he felt players would be allowed back on campus.

“We’re going to have a meeting on May 15 to further look at what the next step is,” Kelly said. “Certainly, there is not going to be classes in the first summer session. Provost [Thomas] Burish has made that clear in a memo to the entire community. But on May 15, we look at, again, in another five weeks where there will be any changes relative to in-person, on-campus and that includes whether we get into any sports-related activities. So that decision will not be made until May 15.”

Kelly said that by not having on-campus workouts leading up to fall camp would most affect incoming freshmen. The veteran coach was straight forward with his answer when it came to anyone’s participation this season.

“First of all, we’re not going to put any student-athlete in a position where they can’t be properly trained to compete at the highest level, so this notion of trying to play the game at its highest level without safety being at the core of what we’re doing, it’s not going to happen,” he said. “I’m not going to put a young man on a playing field and ask him to compete unless he has had the opportunity to be properly conditioned and trained to play this game at the highest level. Again, I think I’ve made it pretty clear in talking to our training staff and our strength and condition staff, we’re going to need a proper amount of training necessary for our guys to be prepared from a safety standpoint to play this game.”

Coaches across America, just like at Notre Dame, are trying to get creative throughout the COVID-19 outbreak. They are trying to find ways to stay in touch with the players, keep them on track academically and have them stay in the best shape possible so that when the stay-at-home order is lifted, and life begins to resemble some normalcy, they will be ready.

That includes going back to his days at Grand Valley State University when football did not stay on campus during the summer months.

“Yes, we’re doing that right now. It’s a very good question. I think we’re doing a lot of things that bring us back to the days where we had to really rely on our players to be self-motivated.

“Again, we’re giving them guidance. There’s no doubt, but we can’t be mandating workouts. We have to trust that we have good leadership, which we do with our players. We’re giving them the opportunity to consult with us, but the days when I was at Grand Valley, we had to call and check-in, and if they had any questions, they could certainly do that, and we’re seeing a lot of that right now, which is great. It’s encouraging. I know our players, particularly those that are in their last season of competition, are certainly anxious and want this to be the best season that they’ve ever had a Notre Dame. They want it to be a championship season.

“We’re getting a lot of calls, alot inquiries and we’re there for them. No doubt, this is a bit old-school from that perspective.”

Among the other topics discussed by Kelly was the status of the Shamrock Series game with Navy in Ireland.

“Certainly, we’re having to discussions about that,” he said. “Clearly, we can’t wait until May 15 to have the first discussion about going overseas. Those discussions are taking place. Jack has a number of things on his plate, those are one of them. Navy is aware of it. We’re looking at all options at this time. We’d like to play the game in Ireland, whether we can or not, that is still obviously a topic that is being discussed, but we will have some alternatives.”

DOWAGIAC — Most of the area summer sports leagues would be wrapping up preparation for the upcoming season, but that... read more