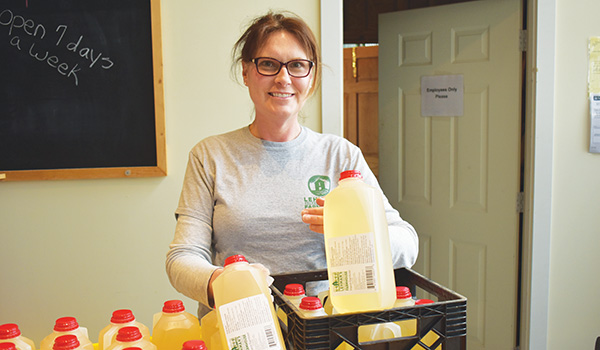 BUCHANAN — With dine-in and drinking socially in tap rooms off the menu, area breweries and distilleries are adapting to their new normal. Dining rooms and glasses sit empty, as equipment takes on a new role: fighting the spread of COVID-19 in southwest Michigan communities.

Lehman’s Farmhouse and Brewery is one of the most recent businesses added to the list of distilleries converting the alcohol it can produce into something not intended for consumption. Known locally for their orchards, ciders, spirits and food, Lehman’s joined the effort to help people stay healthy by shifting some of its alcohol production to make hand sanitizer.

Debra Bonek welcomes customers into the retail area of Lehman’s Farmhouse and Brewery, and mans the stations as customers pick up carryout from the kitchen, fill up on their growlers and purchase retail from the front store.

“The alcohol that we make the alcohol with, it runs through the still,” Bonek said as she motioned to a bottle of whiskey. “We have been doing the alcohol for several years. We had it in barrels, so instead of mixing the spirits with it, it was natural for us to just make hand sanitizer.”

Lehman’s had its alcohol on tap, ready to go, but the components needed to make it safe to use topically were a bit more difficult to obtain.

“It did take a while to find the glycerin and the hydrogen peroxide,” Bonek said. “It took a while to get the bottles in as well. We were on it. It was just getting the rest of the product in.”

The recipe for the hand sanitizer that Lehman’s is selling is simple. It is the recipe that the World Health Organization has released, maintaining 70 percent alcohol content to remain effective, mixing with hydrogen peroxide and glycerin. This makes for a runnier formula than those used to an aloe formulation are used to, but the glycerin acts as a buffer for skin as well.

As soon as Lehman’s posted on Facebook that it had made hand sanitizer, staff were inundated with purchases and orders.

“You can only get so many smaller bottles,” Bonek said. “Those sold out on their first day.”

Since the first batch of hand sanitizer was introduced on Facebook on Saturday, Lehman’s has kept busy brewing up more.

By Tuesday, staff were already on their sixth batch.

The hand sanitizer was being purchased by customers visiting Lehman’s, and large orders coming from the area were being fulfilled.

According to Bonek, area hospitals and American Electric Power had contacted Lehman’s to place orders. There had also been deliveries of the sanitizer on the way to Detroit and LaPorte, Indiana.

“People are sending it to their relatives because they can’t find it anywhere,” Bonek said.

The hand sanitizer is unscented and sold in both half gallon jugs and 12-ounce bottles.

Lehman’s Farmhouse and Brewery is still offering carryout from its kitchen menu, filling growlers with its consumable brews, and its retail area is staying open.

As communities continue to find creative ways to use their resources, Bonek was happy Lehman’s could be a part of the efforts.

“We’re just happy to be able to do our part to help Americans,” she said.

DOWAGIAC — As seniors took their possible last steps through high school on March 13, many were unaware they would... read more