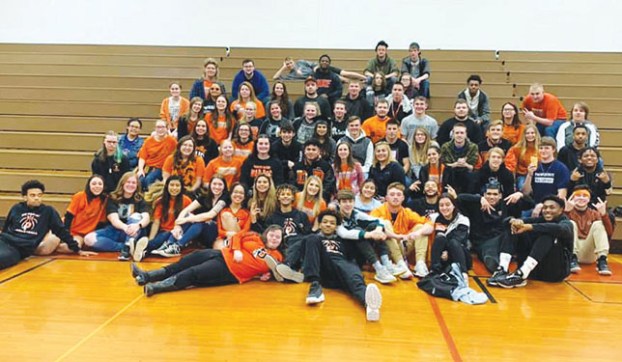 DOWAGIAC — As seniors took their possible last steps through high school on March 13, many were unaware they would not be returning to face-to-face education for the remainder of the school year.

For Dowagiac Union High School senior Skylan Whitaker, this meant not returning to the choir classroom, not being involved in the spring concert or the senior slide show.

“It was sad hearing about it because I am missing out on a lot of things during my senior year,” Whitaker said after the announcement on April 2 by Michigan Gov. Gretchen Whitmer, who issued an executive order for the provision of K-12 education during the remainder of the 2019-2020 school year.

Whitaker met the situation with mixed feelings. The senior, who works at a grocery store, became an essential employee overnight. She has used the job as a way to save up money for a car.

“It’s so weird being called what I would call an essential worker,” Whitaker said. “Before the state put everybody on lockdown, it was really crazy, and then after the lockdown, it went from 100 to zero so fast. Still, its concerning to be out and being involved with the public, but it’s definitely something.”

Whitaker said she finished her work with the Michigan graduate class and is trying to get used to her other classes moving online.

“It’s definitely different because being online whenever you get on is when you do your work,” Whitaker said. “It’s not like waking up at 6 o’clock In the morning and going to school for seven hours.”

As Dowagiac Union Schools create a plan for its new distance learning options, which will be due by April 28 and must be approved by the local intermediate school districts as representatives of the state, Whitaker hopes Zoom meetings might be included.

“It’s like video chatting the entire class,” She said. “It’s not face to face, but it’s definitely better than assigning work and having it explained over paper. Some people have better learning ability when they are able to have a conversation with the teacher.”

Also walking the Dowagiac school halls for a possible last time was senior Nathan Hammond, who did not picture his senior year ending so abruptly.

Hammond, who has been a cadet on the Keeler Township Fire Rescue since October 2019, has also gotten a taste of what being an essential employee is like.

On Sunday mornings, Hammond routinely goes to the Keeler Township Fire Department and inspects the trucks to ensure everything is in place and working properly.

Through school, Hammond visited the Dowagiac Fire Department during a week-long camp and learned the basics of firefighting.

“I did a summer thing with a few years ago, and it was at the Dowagiac Fire Department, and it got me into the whole thing,” he said. “I’ve always kind of wanted to be a first responder and working in that kind of field.”

During his senior year, Hammond was going to the Van Buren Tech Center and taking classes through the fire academy. Since the COVID-19 pandemic, his classes have moved online.

COVID-19 has not only canceled his high school classes but could impact his future plans.

“I want to continue with the fire fighting but with this whole thing going on, I am not sure when I am going to be able to take my state test, and that’s how we get our certification,” Hammond said.

By moving classes online, Hammond said there is less collaborative work. However, he said he is continually learning.

After graduation, he has plans to get his emergency medical technician license as well.

In terms of COVID-19, Hammond said in the fire academy he has learned how to protect himself from illnesses but feel’s COVID-19 is being handled on a departmental basis.

Outside of classes, Hammond said it has finally sunk in that he will not have the normal senior experience.

“I didn’t think I would be too upset, but now that school has been canceled I kind of realized I was kind of really excited for those things like prom and graduation parties,” he said.  “I am hoping we still get to have graduation.”

Whitaker feels her future plans will not be impacted by the lack of face-to-face traditional education.

“Personally, I told myself I would be prepared because I am going into an 11-month program for cosmetology,” she said. “I know I am going to be ready by the time I go. There is learning to it, but it is not like all of these other things they expect you to know. We still had awhile to go and a lot of things on the list, but it just got taken away.”

Dowagiac Union Schools is hoping to begin new processes for distance learning on Monday, April 20, but plans to start no later than the required April 28 date listed in Whitmer’s executive order. The plan will be developed with two forms of delivery: electronic for students with access to broadband internet and devices and learning packets for those with no internet access, according to a statement posted on the school’s website from Superintendent Jonathan Whan.

Whan could not be reached for a comment as of press time.

DOWAGIAC — With the COVID-19 pandemic, it is unknown when Michiganders will be able to sit in front of the... read more