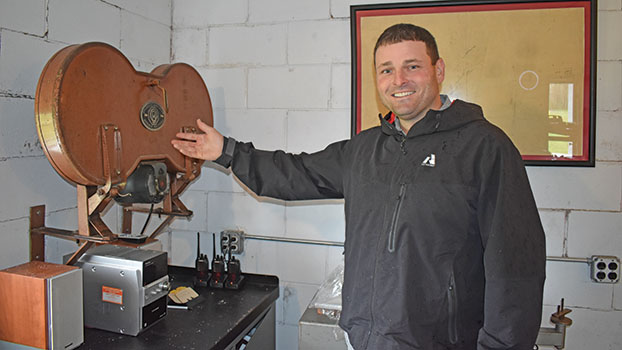 Milton Edwards, owner of 5-Mile Drive-in and Sunset Drive-in, shows off an old film reel that is no longer used. (Leader photo/SARAH CULTON)

DOWAGIAC — With the COVID-19 pandemic, it is unknown when Michiganders will be able to sit in front of the big screen again. However, Glenda Edwards, the owner of 5 Mile Drive-In, is optimistic it will be sooner rather than later.

Glenda, along with her husband, Neal, own 5 Mile Drive-In in Dowagiac, 28190 M-152 and Sunset Drive-in in Hartford, 69071 Red Arrow Hwy. The couple manages the theaters along with their son Milton. In 2003, the couple bought Sunset, and three years later, purchased 5 Mile, which accommodates up to 500 cars.

Edwards said due to the COVID-19 pandemic, preparing to open the drive-ins has been different this year.

“On a normal year we would be open on the first of May,” she said. “With everything going on, I am not sure we are going to be able to open then.”

Currently, Edwards said she is waiting for an announcement from Whitmer allowing business to reopen, so the drive-in season can begin.

Edwards said she has been discussing how things will be run differently this year to make the movie going experience safer for employees and customers.

“We certainty are going to do everything in our power to make sure we keep our attendees as safe as possible,” Edwards said. “I think compared to the indoor theater, the drive-in theater is going to be a safer place for them.”

One aspect of the experience that might have to be reworked is the concession stand and its setup.

“We have had several discussions on how we are going to handle that this year and what happens with that,” Edwards said. “Up until this year, we have never allowed outside food or drink because it is the biggest thing for the drive-in and to be able to be profitable our concessions are a huge asset to that.”

Another factor that impacts the drive-in’s feature film season is mother nature herself.

“I know last year we had one day where we had a snow storm during our season,” Edwards said. “Usually, a lot of people get outside of their cars. I would assume a lot of people are going to stay inside their cars this year and just watch the movie from the inside. I think it is very safe for them because they can open their hatch in the back and they can remain inside. I think they will feel real comfortable.”

Another factor is the available movies. Edwards said people are not seeing new releases and most movie theaters have cleaned their slates until June 1. This could mean visitors to 5 Mile Drive-In or Sunset Drive-In could be seeing older movies.

“Everybody in the industry kind of gets the red light because it’s not real profitable for the movie companies if they just have the drive-ins [open],” she said.

In Michigan, there are nine remaining drive-in movie theaters, according to the United Drive-in Theatre Owners Association’s website. Nationwide, there are 305 still operating, as of October 2019. The high figure for drive-ins according to industry resources was 4,063 in 1958.

Edwards is staying updated on how the industry is progressing through the situation and still aiming for a May 1 opening date dependent on new executive orders from Whitmer.

“About every week or so we have a conference call on what’s coming out, what’s happening and where the movie companies are at,” she said. “[The industry] is doing as much as they can. They would like to see the movies get back out to the public. They would like to keep the public invested in the movie theaters, and I know that they are anticipating getting back to work as soon as possible too.”

SOUTHWEST MICHIGAN — School buildings may be closed, but seniors are still making plans for their next steps past graduating... read more