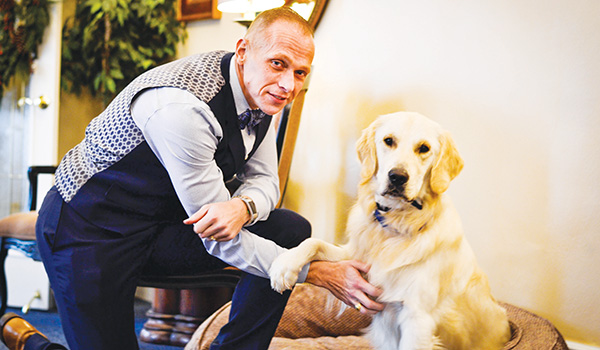 Tim Brown, of Brown Funeral Home, is one of the many funeral directors across the state adapting to changes in services due to COVID-19 concerns. (Leader file photo)

SOUTHWEST MICHIGAN — When the family of the late Charles “Chuck” Dill celebrated his life Monday, the room they gathered in to host his funeral was packed with empty chairs.

However, contrary to how things may seem upon first glance, Dill did not lack any mourners. Each chair — tied with white balloons and messages of condolences — represented a friend or loved one who wanted to be there but could not due to concerns surrounding the spread of the COVID-19 virus.

“We have a program called ‘Hugs from Home,’” said Cameron Ondresky, funeral director and manager of Swem Chapel, Starks Family Funeral Home. “When people call in, we blow up balloons and take down the messages, so that when the family comes in, they aren’t seeing an empty chapel. They are seeing messages from family, friends and the community. I think that visual representation goes a long way.”

The wake of preventative measures and a ban on large gatherings due to the COVID-19 pandemic, funeral homes across the nation have had to change their approach and offer alternative funeral arrangements to grieving families. Many are moving to provide virtual services through Facebook Live, Zoom and private recordings in lieu of public services. Others, like Starks Family Funeral Home, are offering creative solutions to show families that the community cared for their loved ones. Most funeral homes across the state, are limiting services to immediate family only at this time, while offering families the option of hosting a public service once state mandates are lifted. 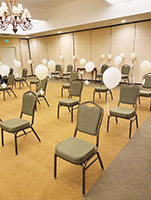 Starks Family Funeral Home is tying balloons to chairs to symbolize people who have called in to express condolences to the family. (Submitted photo)

No matter what solution a funeral home arrives at, local funeral directors are saying that the absence of a traditional funeral has been painful for families saying goodbye during the pandemic — especially as restrictions on public gathers may conflict with the deceased’s wishes. 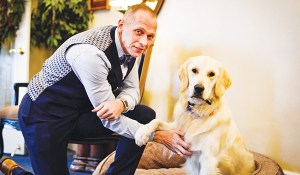 “I think it is difficult,” said Tim Brown, of Brown Funeral Home. “The reason for a funeral is for family and friends to come together to say goodbye. We understand the need to reach out to others, and we understand the need to be able to be consoled by those friends and family members and people whose lives were touched [by the deceased]. We are living in a time when it is difficult to do that and have those individuals present.”

“We are restricted right now as to how many people can be here, so we are trying to keep to that 10 or less,” added Steve Wickens, of Halbritter-Wickens Funeral Home. “This is hard for the families because this is a time when people want to hug and console each other, but instead, they need to be standing 6 feet apart. … Some families, who want visitations, want public services, are not getting what they need right now.”

It is not just the families who need to adjust to the new restrictions — funeral service workers do as well. While many funeral homes have been set up for recordings or virtual services for some time to allow families separated by distance mourn together, the COVID-19 pandemic has forced funeral directors to make virtual services their primary model. Wickens said these changes have come with a learning curve.

“It is definitely different for us not to be able to interact with families as much as we would like,” he said.

Eventually, funeral directors like Wickens, Brown and Ondresky are preparing for a possibility where, if the pandemic gets worse, they may have to meet with families either over the phone or video to make funeral arrangements. However, they said they hope things do not get to that point. In the meantime, they are taking additional sanitation and protective measures to prevent COVID-19 spread.

Despite the changes that have resulted from coronavirus restrictions, area funeral directors said families have been understanding and, like the funeral homes themselves, are taking the virus seriously to help slow its spread.

While it is currently unknown when the virus concerns will fade, and restrictions will be lifted, Brown, Wickens and Ondresky expect the funeral industry will face lasting changes.

“I’m sure there is going to be a lasting impact, not just for us as a funeral home, but for the funeral industry as a whole. There will be changes attitude-wise with quite a few industries nationwide,” Wickens said. “We will just continue to adjust to the community’s needs. We will help them the best we can.”

Ondresky is hoping some of the resulting changes will be positive.

“I’m hoping, if anything, this can just maybe give an appreciation for that contact, for the ability to have memorials and public services,” he said. “Maybe it will show the importance of having that period to grieve — to have the community around you — and give another level of importance to that.”

NILES — While schools remain under state mandates until at least April 13, and are likely to remain closed through... read more