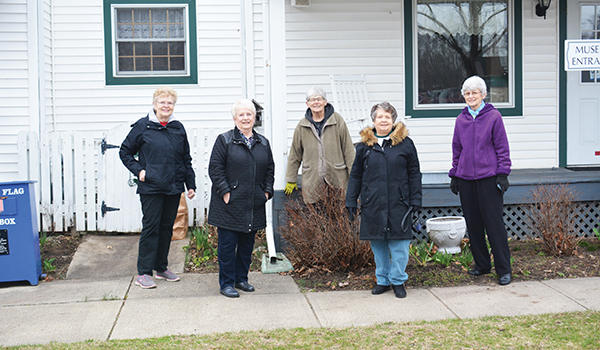 As part of the celebration, Wednesday, the group moved a rock that was used to mark the Sauk Trail passing through Edwardsburg in 1826 to the outside of the Edwardsburg History Museum. Previously, it was located at the corner of US-12 and Section Street. The rock was originally placed in 1923.

The club, which used to meet every Monday, was initially organized to improve literacy and engage in charitable and civic affairs. The Monday Evening Club’s first meeting was hosted Nov. 19, 1894, inside of Mary Latson’s millinery store. The eight founders of the club include P.D. May, Frances Sweetland, Mary Schock, Mary Carlisle, Mary Latson, Kitty Reed, and Belle and Lydia Blaire.

While the club no longer meets every Monday, over the years, the club has worked on a number of projects. In 1910, the club appointed a committee to establish the steps to be taken toward Edwardsburg becoming a village, and after working for 17 months, the village was formally incorporated on March 18, 1912. 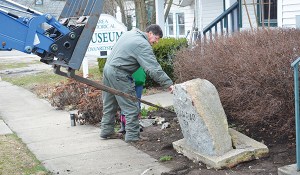 In 1914, the club collected money and planted 28 maple trees in the village park. In 1923, the club placed a boulder opposite the school to mark the “Old Chicago Trail.” In the 1930s, the club secured books from the state for a “traveling library” for community use. During the 1940 war years, the club supported troops by sending cards, letters and packages to servicemen and women, helped with salvage collections, victory gardens and collecting money for the Red Cross and the Percy Jones Army Hospital in Battle Creek, Michigan.

Club president said moving the rock to the Edwardsburg History Museum was a way to preserve the club’s history and celebrate its achievement of operating for 125 years.

“This is a historic place in town, and the rock is a piece of our history,” said Judy Singley. “This all just came together for our 125th anniversary celebration.

CASSOPOLIS — With the Law and Courts Building closed to the public until mid-April, the Circuit Court sentencing docket was... read more