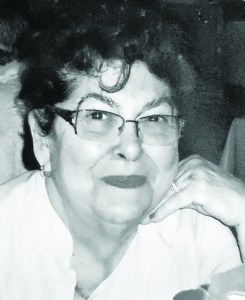 She was born on Aug. 14, 1941, in Searcy, Arkansas to J.L. and Avanell Francine (Law) Wright. The apple of her daddy’s eye, they enjoyed dancing, most notably the Jitterbug.

On July 19, 1957, Peggy married the love of her life, Eldon Gordon, eloping in Hernando, Mississippi. Peggy worked as a department manager for Walmart until her retirement.

Peggy had a variety of interests throughout the years including bowling, canning, watching NASCAR, reading mysteries, camping, riding motorcycles, snowmobiles and trips to the casino. Peggy was also an accomplished seamstress, sewing bridesmaid’s dresses for weddings, as well as making many of her children’s clothing which were some of the ways she showed love for her family, as they meant everything to her.

She was preceded in death by her parents; her husband, Eldon Gordon; a son, Gregory Scot Gordon and a daughter, Diana Gordon.

Her family will gather privately for a funeral service at Brown Funeral Home. Peggy will be laid to rest next to her love Eldon at Mission Hills.

Memorial contributions may be made in Peggy’s memory to Hospice at Home, Inc. 4025 Heath Park Lane, St. Joseph, MI 49085 or to the American Cancer Society.

Condolences, messages and photos may be left for the family at BrownFuneralHomeNiles.com

Arrangements have been entrusted to Brown Funeral Home.

Peggy will be remembered for her great sense of humor and the way in which she cared for others.