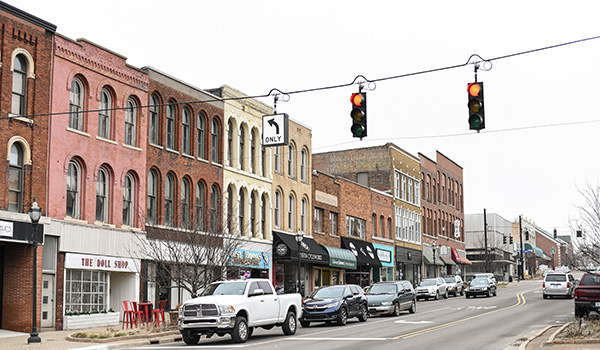 NILES — As stay-at-home orders were handed down by Gov. Gretchen Whitmer on Monday morning, Niles businesses scrambled to find out what the orders meant for them.

The order from Whitmer will go into effect at 12:01 a.m. Tuesday and remain in effect through 11:59 p.m. April 13.  The order prohibits in-person work that is “not necessary to sustain or protect life,” as well as prohibits most public and private gatherings. The order also includes that those leaving their homes must follow measures the Centers for Disease Control and Prevention have handed down, including that individuals stay 6 feet apart from those who do not share a residence.

The order does not directly impact restaurants already doing carry-out and delivery orders.

Local businesses have been watching closely at what each order from the state could mean for them. For Rusty Hooks Bait & Tackle, the mandate hits hard.

“It’ll force us to close,” said Don Wilkie, a manager at the shop. “I think people have been anticipating this. [The store] was jammed for the last week. People were off work and able to enjoy the outdoors and go fishing.”

The shop owner had enjoyed seeing more people come through the doors, as customers were able to purchase bait and then stay away from crowds as they took some time to fish.

Other businesses were going to further adapt to the measures, like floral shop East Main Gardens.

“We just have to deal with this the best we can,” said Mike Peters, owner of East Main Gardens. “Hopefully we can continue to keep going.”

While Peters’ business will close to walk-ins, his phone will stay on and answered. While churches and hospitals have canceled orders, nursing homes will accept flowers.

“We still have to deliver flowers for funeral homes,” Peters said. “We are just doing the best that we can do, just keep hanging in there and doing what we can.”

Melanie Kennedy remains hopeful that the orders will not affect too much business at her event space, The Grand LV.

“Fortunately, we had a really light April month [planned],” Kennedy said. “I had rescheduled the Spring Market to April 4, and had already anticipated that it would need to be rescheduled anyway. I don’t think we had anything else in that time frame that’s an issue.”

Kennedy said some May and June weddings had inquired about moving to later dates in the year, but that it had not become an issue yet.

Area marijuana businesses were taking precautions as well, but had already seen their businesses take a hit.

“As of tonight, we will have to shut down our retail operation, so nobody can enter the building and buy cannabis directly,” said George Lynch, CEO of Green Stem.

The business will move its options for purchase to curbside delivery, online orders and delivery only.

“I was given a license to deliver, I just have to figure out the logistics,” Lynch said. “I don’t know how we would survive if we weren’t able to stay open, but at least we can limp along for a while.”

Lynch noted that these circumstances are unprecedented for his time.

“I’m 63 years old. I’ve never lived through this before,” Lynch said. “Everybody is involved. We’re going to do what we need to do to take care of our patients and our employees.”

Another center, the ReLeaf Center, responded with their concerns as well.

“We’re going to do everything we have to do to protect our patients, our employees and our customers. It’s not worth anybody getting sick over,” said a spokesperson for the ReLeaf Center.

The center had already implemented limited entrance to the facility, allowing just five customers inside at a time. Those wishing to make purchases were assigned numbers and waited in their vehicles until it is their turn.

“We want to protect the people,” said the spokesperson for the center.