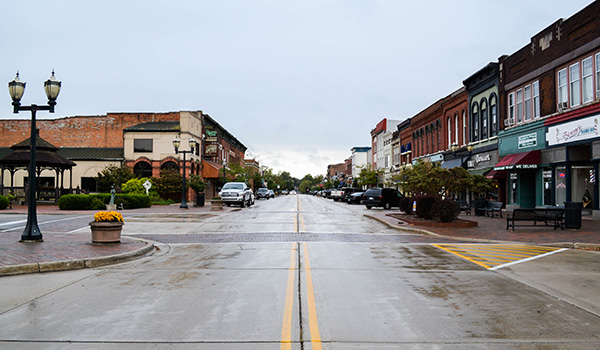 DOWAGIAC — When Michigan Gov. Gretchen Whitmer issued a stay-at-home order Monday the Greater Dowagiac Chamber of Commerce felt ahead of the curve.

Before Whitmer’s press conference, the chamber board, including President Kim MacGregor, of Edward Jones, 148 S. Front St., had met to speak about the next steps taken to slow down the COVID-19 in Michigan. Under the new order, restaurants are still allowed to stay open for carryout orders. However, retailers selling non-food items are required to close. Business operations “necessary to sustain or protect life” are exempt from closing, according to the order.

“Last week, we decided to close the chamber offices to the public, but Chamber Director Vickie Phillipson was still working out of it,” MacGregor said. “Vickie has been very proactive about sharing every businesses’ news on Facebook, so we can go there and spend some money on our local businesses.”

MacGregor confirmed Phillipson would be working from home and available for anything chamber members needed during the stay-at-home period.

Last week, after restaurants found out they would be closed to the public, MacGregor spoke with people who were out supporting local Dowagiac businesses.

“While there may not have been a ton of shoppers outside, they might have been purchasing things online or calling restaurants ahead and picking up food curbside,” she said. “I know restaurants, for one, have been going above and beyond.”

Unlike restaurants, non-essential businesses, including retail spaces, were mandated to shut down under the governor’s orders.

Art Springsteen, who is one of the longtime business owners in town, has owned Imperial Furniture, 57530 M-51, Dowagiac, for more than 54 years. He said he has never experienced a mandated closure that has lasted anywhere near three weeks.

“I’ve never seen anything like this,” he said. “We might run into three- to four-day shutdowns, but not this.”

Upon hearing the mandate, Springsteen was not surprised his retail business would have to close, as he has stayed updated with national coverage.

This past weekend, Springsteen said the store had a busy Saturday and had some shoppers browsing the store. With the new mandate, Springsteen will have to be in communication with trucking companies who drop off shipments of furniture to the store.

“Now, we are going to have to hold the furniture because we won’t have a crew here,” he said.

Fifteen minutes after hearing the news, Rohdy was already calling clients to reschedule appointments they had scheduled within the closure’s time frame.

“I thought we could ride out the storm, but I figured something was going to happen,” she said.

Last week, Rohdy said her business had not slowed down at all. On Monday, before the stay-at-home order at 11 a.m., she had already received two calls from clients wanting appointments because they were not working.

“I think my business has picked up last week and today,” she said.

With her business closed, Rohdy plans to get chores done around the house.

“I am going to treat it as a stay-cation,” she said.

Both business owners, along with MacGregor, are optimistic that the community will support Dowagiac’s small business sector after April 13.

“I believe that our people will continually support our local businesses, and this will be eye-opening for some to show how much support there is in our town,” MacGregor said.

Rohdy said she believed her business would be busier than ever when she reopens, as three weeks’ worth of appointments will need to be rescheduled.

Springsteen also believed his customer base from Cass and Berrien counties, Kalamazoo, Shipshewana, Indiana and Benton Harbor would continue to support the furniture store once it reopens.

“Once this gets squared away, we should see quite a jump in business,” he said. “People are cooped up for this period of time. It’s going to be tough to just sit back, but we are going to make it through it.”