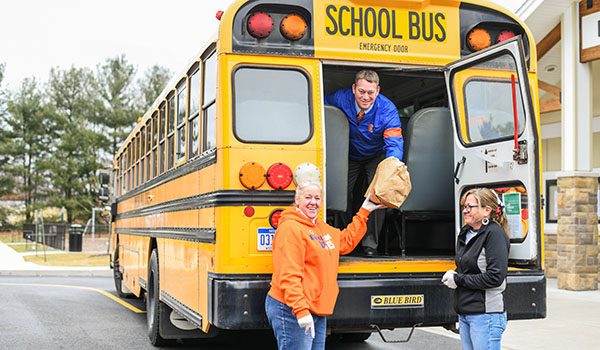 CASS COUNTY — For many children in Cass County, the only meal they could rely on daily was the one they received at school. So, when schools were mandated to close until at least April 5 last week by Gov. Gretchen Whitmer to slow the spread of COVID-19, parents were worried.

Now, local schools, including Edwardsburg Public Schools and Cassopolis Public Schools, are making efforts to provide meals to students while schools are closed.

At Edwardsburg Public Schools, meals are being delivered to students at several locations. The program, which is being reimbursed by the state, is set to run until spring break, which begins April 3. However, Superintendent Jim Knoll said that if the governor extends school closures, the district is prepared to continue running free meals through to the end of the year.

So far, Knoll said the community is responding positively to the meal program, and many people are offering to volunteer should the district need help.

“I think our families are grateful,” he said. “I want to say thank you to all the people who have volunteered and offered their time and efforts to make this happen.”

At Edwardsburg Public Schools, through April 3, meals can be picked up between 11 a.m. and 12:30 p.m. Tuesdays and Fridays by driving through one of the following locations:

On Tuesdays and Fridays, each child will receive three breakfasts and three lunches (12 total meals per week). An EPS school bus will be at each location to hand out meals, which are available by drive-through only.

In Cassopolis, Cassopolis Public Schools will be providing breakfast and lunch to any child under the age of 18 or anyone 26 and under with a disability. The district will be serving pre-packaged breakfast along with several days of lunch items that can be easily assembled for fresh meals until the next distribution day.

Students do not need to be present at pickup, and district officials encourage the community to help out their neighbors by picking up meals and delivering to those who cannot make the pickup time, district officials wrote in a letter to parents. To pick up meals, the district is asking that individuals bring containers to take home.

Meals will be offered from 3:30 to 5 p.m. Mondays and Thursdays at the following locations: