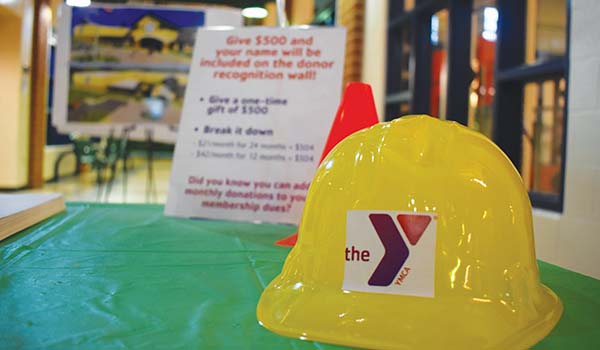 NILES — The Niles-Buchanan YMCA has spent the last four years fundraising for a building and programming expansion.

Now, the “countdown” has begun, said Jill Haboush, vice president of fund development and marketing for the YMCA of Greater Michiana, the local branch’s association.

The local YMCA has raised $2.4 million to build a full-sized gymnasium, teenager center, youth center and fitness studio at its 905 N. Front St. location. If an additional $300,000 in donations is raised, a $300,000 matching grant from an anonymous family foundation will be applied, and the branch would reach its goal.

To help reach its $3 million fundraising goal, the Niles-Buchanan YMCA is hosting its inaugural Day of Giving March 2. Members can stop in anytime to learn about the capital campaign project and donate. Staff donning Day of Giving buttons will be available for discussion.

Haboush said any donation is meaningful, from the change in one’s pocket to a $500 check that would give a donator recognition on a board.

People will be able to donate at ymcagm.org/support-y/capital-expansion.

“We are in the home stretch, almost there, but we are still looking for a little bit more community support to get us to that goal,” Haboush said.

Day of Giving is part of a larger effort being made by some YMCA branches across the nation. Haboush said it is meant to reflect Giving Tuesday, a holiday the Tuesday after Thanksgiving where people donate to causes meaningful to them.

The YMCA wanted to designate a different date outside of the holiday season to make the event its own.

Whether the Niles-Buchanan YMCA is able to secure funds for a matching grant or not, the branch plans to break ground on construction April 1.

“Most of the pledges are paid in, so we truly have the bulk of the $2.4 million ready, and we have the additional cash flow needed to get rolling,” Haboush said.

The property was marked for construction Monday by contractor Pearson Construction, of Benton Harbor. Subcontracts will be bid on a few days.

People will be able to use the YMCA’s current facility when construction in underway. Development is expected to take between six and eight months.

Once construction is complete, the new, all-age spaces will be places for both exercise and health education.

“We are excited because we’ve been raising funds for four years,” Haboush said on behalf of staff.

Departments are now working to determine the specifics of the future rooms they will utilize, from flooring to furniture.

The YMCA of Greater Michiana’s other branches in St. Joseph and South Bend are also undergoing capital campaigns and are using Day of Giving to encourage donations to them.

The South Bend-Mishawaka YMCA is about $9,000 away from securing a $100,000 matching grant that could make general facility improvements. Its board is also brainstorming the branch’s future.

The Benton Harbor-St. Joseph YMCA is at the start of its capital campaign, raising funds for new locker rooms and a preschool facility.

People do not need to donate to capital campaigns on Day of Giving, however.

If people wish to donate to the YMCA of Greater Michiana’s swim safety programming, its cancer well-being class or its summer day camps, they may do so.

CASSOPOLIS — Tuesday, the COA hosted its annual Mardi Gras lunch at both its Cassopolis and Dowagiac locations. To celebrate... read more