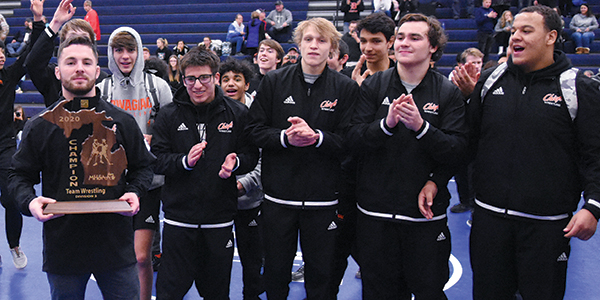 Colin Burandt and the Chieftains continue to rebuild the wrestling tradition at Dowagiac. The Chieftains return to the quarterfinals for a third straight season, (Leader photo/SCOTT NOVAK)

It is the final week of February, which means the postseason is about to shift into high gear.

Wrestling tournament action began two weeks ago. The team portion of the Michigan High School Athletic Association postseason wraps up this weekend at Wing Stadium in Kalamazoo. The individual state finals will be the following weekend at Ford Field in Detroit.

It has been another great season for area wrestling teams. We have had division and conference champions. We have had a pair of district champions, and now, Dowagiac will march into Wings Stadium Friday afternoon as a regional champion for the third straight season.

You all know the story by now, but for those who may be new to the area, Dowagiac was once one of the top wrestling programs in the entire state. The Chieftains went to the state finals year after year, but then Dowagiac fell upon hard times. That is until Colin Burandt took over the program five years ago.

To make a long story short, Dowagiac could not fill an entire line up Burandt’s first year. The Chieftains showed great improvement and increased its numbers, the second year. Dowagiac should have been a district champion, but was upset by Constantine at home in the district finals.

Undeterred, Burandt and the Chieftains kept pushing forward and are now three-time defending district and regional champions. The program continues to be on an upswing. What was once a proud tradition has been revived through the hard work of Burandt, his coaching staff, and most importantly, the wrestlers, who have bought into the program.

The team tournament has become the focus of the Chieftain program. Winning a conference championship would be nice, but for Dowagiac, winning district and regional championships are more important. That means a trip to the state finals, where the Chieftains are once again becoming a mainstay.

For some reason, the Chieftains have not earned that respect. They continue to be a seventh or eighth seed, which means taking on the top two teams in the seedings in the opening round each season.

Dowagiac enters Friday’s match against No. 1-seeded Dundee, defending state champion many times over, with more losses than any other team in Division 3. But if you take a closer look at the record, the Chieftains have not ducked anyone. They only have one loss within their division. Their losses have come against teams in Division 2 and Division 1, or they have come against ranked teams, which will also be competing this weekend in Kalamazoo.

You have to wonder if scheduling “up” has done Dowagiac any favors? Maybe it should put together a weaker schedule that will build an impressive final regular-season record, but will not get the team ready for the postseason.

I do not have any answers, but I sure would like to get some. What is it going to take to get a little respect in that seeding meeting? What can Dowagiac do to impress the committee?

Burandt and the Chieftains will not use the seeding process as an excuse this weekend. They will take to the mat and try to upset Dundee to advance to the semifinals on Saturday. It would be quite an achievement for Dowagiac. It would be another step in the evolution of the program that continues to rebuild its tradition.

I encourage Dowagiac fans to turn out in large numbers on Friday to cheer the team on. The Chieftains will need that emotional lift as it goes for the upset. It will also show the state of Michigan that although they may not give the team much respect, its fans remember its long history of success in wrestling.

Maybe in some way, that can sway the decision-makers next season when Dowagiac returns for a fourth consecutive state finals appearance.

BUCHANAN — For the third time in its nine-year history, Buchanan is the winner of the Michigan High School Athletic... read more