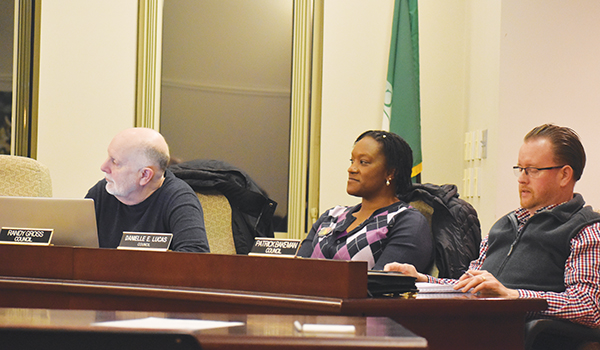 DOWAGIAC — The city of Dowagiac is moving forward with its plans to install a modular home.

At Monday’s city council meeting, the council hosted a required public hearing on the Michigan State Housing Development Authority’s modular grant program, which will bring one modular spec home to a property at Parsonage and Spruce streets.

The city will receive a maximum amount of $196,000 to build the modular home on a city-owned lot. Once the house is built, it will serve as a model on display for the community to learn more about modular homes.

If three additional modular houses are built and sold, the city could be eligible to participate in the MSHDA mod program again, said City Manager Kevin Anderson. Those homes would need to be sold at the market rate. The city also would have up to four years to sell the spec home and additional modular homes.

The city’s expectation is to sell the spec home. However, any eligible buyer has to be at or below 120 percent of the average median income of the area, which equates to $75,240 for a family of four.

“The program is centered on trying to be a catalyst to demonstrate that housing can be built in existing neighborhoods,” Anderson said.

Resident Diane Barret-Curtis said $196,000 for 1,300 square feet seemed like a lot of money for not too much of a house.

Curtis asked several questions of the council, including what would happen to the home if nobody was able to purchase it. She wondered if the mod home would be energy efficient.

“My concern was that I had not seen a lot of new job growth in Dowagiac,” Curtis said. “I was just wondering what that new job growth is in that area to know that there is job growth to support this housing.”

Curtis said she is not opposed to modular homes but noted the city would have to reimburse the state if a buyer was not found.

Anderson addressed all of Curtis’ questions, starting with meeting the job growth criteria. He said the distance covers a 30 to 40-minute drive and extends into Elkhart, Mishawaka, South Bend and St. Joseph’s area marketplaces, also.

Anderson and Assistant Manager Natalie Dean also attended a seminar with past grantees.

“One of the most difficult things in the first round of this first house is finding ones that will be in the comparable cost spot,” he said. “You are going into existing neighborhoods that need a lot of work to them or need investment to them.”

Anderson said past grantees found it challenging to get a full assessed value of the modular homes until they got on the market and were sold. He said older houses in the same neighborhood had sold anywhere from $125,000 to $180,000.

Anderson said the mod home is going to be an experiment in the marketplace. Also, MSHDA noticed Dowagiac’s high walkability score.

“The state of Michigan is willing to put up money of which we could have some that we do need to pay back if it sells more than 10 percent lower of what is invested in it,” Anderson said. “That is a risk we all have to be aware of and know. It’s not free money. There are always risks.”

Mayor Pro-Tem Leon Laylin said, based on housing studies and the city’s success with the Neighborhood Enchantment Grant, the council believes it can come out of the mod program relatively clean.

“If that lights the fire as our repairs have done, we could have one of these houses sold on the regular market to anyone available,” he said.

• The city received audit results from YEO & YEO CPAs & Business Consultants for the fiscal year ending Sept. 30, 2019. The results were presented by Jamie Rivette, a certified public accountant and a certified government financial manager. The auditor reported the city’s financial statements and procedures comply with good accounting practices and law.

• A resolution was passed to authorize the Michigan Department of Transportation with a contract for the design of T-Hangars at the Dowagiac Municipal Airport. MDOT received a block grant from the Federal Aviation Administration for airport development projects. The Office of Aeronautics has said Dowagiac Municipal Airport is eligible for grant funds assisting with the construction of the project.

• A resolution was passed to enter an agreement with GHD Services Inc. for select residential well survey activities for the former Dowagiac Landfill on Nubour Road. The landfill is required to remain compliant with the Michigan Department of Environmental Quality regulations for on-going testing. The agreement of services is expected to cost $21,639 in 2020. The city remains responsible for maintaining, inspecting, monitoring and reporting gas monitoring activities.

• A resolution was unanimously passed to enter into a professional service agreement with Precision Concrete Cutting, of Holland, Michigan, to assess all city sidewalks. Following the assessment, the city will establish an improvement plan. The estimated cost to conduct the survey is $24,500 and will be scheduled in the spring.

DOWAGIAC — Melissa Gunn is no stranger to the world of books. While she owns her own business, Deck the... read more