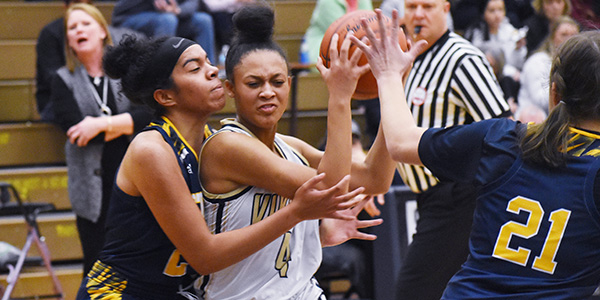 Niles gets defensive in win over St. Joe

As the winning team walked off the court, the night meant more than just a win over a tough St. Joe opponent, and it also marked senior night for Alycia Patterson, Reese Davies, Makenna Fonseca and Morgan Warren.

“It’s pretty bittersweet,” Patterson said following the team’s victory. “I was kind of sad when the season started because I didn’t want it to end ever. Today was a really fun day, everybody giving me gifts and showing me love and we ended it with a win against St. Joe. We never beat them, so I am proud of that and proud of the way our team played as well.”

“It’s good to feel the love and emotions we’ve had throughout the year and to have it especially high today,” Warren said.

Patterson, a four-year varsity player, said she was proud of her team’s high intensity and energy in the second half.

“I feel like we played as a team today, and that’s why we got a really good win,” she said.

At the end of the first quarter, Niles led the Bears 16-13. In the next quarter, both teams each added nine points.

A strong offensive and defensive third quarter are what propelled the Vikings to a dominating win over St. Joe.

Niles scored 17 points in the third quarter and only allowed the Bears three points.

“I really thought it was the defense,” Niles coach Jessica Johnson said of her team’s third-quarter performance. “I really believe if we work hard on defense, the offense is going to come easier for us. Our points in the third quarter were a lot of transition points, so I really think it was the defense that turned us around.

“It was very difficult to guard the post for St. Joe,” Johnson said. “Even with our post and foul trouble, I thought with our subs coming in, which we are shorter, did an excellent job defending the big girls.”

Johnson said despite her team’s lack of a true post player, defensively, all of the girls rebounded and boxed out under the basket.

As Friday night meant a lot for the seniors, it also did for Johnson.

“Alycia Patterson, she has been on varsity for four years, I’ve been coaching the team for four years, so I’m to the point where I’m not sure what I will do without her,” Johnson said. “Reese Davies is always hitting those boards, and she is a great player. Morgan keeps the whole team’s spirit up. MaKenna is a new addition coming from Edwardsburg this year, but she has bonded so closely with the girls and so quickly. The seniors mean a lot when it comes to holding this team together, and so it is going to be difficult to see them go.”

Her output moved her within six points of tying Brandi Radde for second place on the all-time scoring list. Patterson now has 1,158 points in her career, while Radde finished with 1,164. Sarah Dreher is the all-time leading scorer with 1,205 points.

The Vikings head to Battle Creek Central to face the Bearcats tonight.

On the boys side, the Vikings kept up with a fast-paced St. Joe team for the first half of the game. They were only trailing by five points headed into the locker room.

Mari Nichols led Niles for the night with 15 points, followed by Michael Gilcrese, who added seven points for the Vikings.

Alex McIntosh is a senior on the Dowagiac wrestling team. What has been one of your greatest accomplishments as an... read more