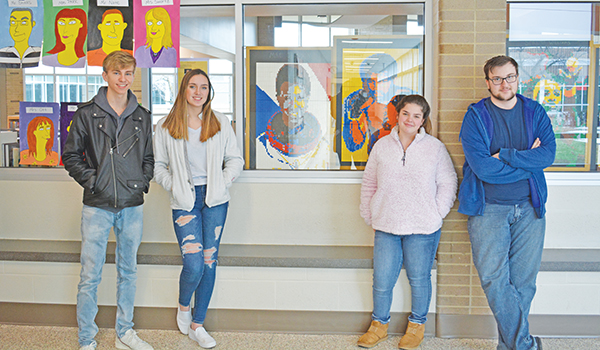 DOWAGIAC — If one were to walk down the halls of Dowagiac Union High School this month, they would be greeted by colorful, pixelated images of African American leaders and athletes, both past and present.

“To celebrate Black History Month, we had the students select some important black Americans to celebrate them with the murals. They did presentations, and we voted on the top four,” said art teacher Courtney Dwyer. “It’s nice for the students to learn about people who have influenced America in a positive way. Black History Month is an important thing that we should celebrate.”

To make the murals, students created pixelated images of their subjects and worked in groups to create grids on several base plates that, when fitted together, create one image. This is the second year Dwyer has had students at the high school level created the Lego murals.

“They really enjoy doing it,” Dwyer said. “It’s a project where 100 percent of the class is involved.”

The students spent 15 days working on their murals. According to several students, the project was a difficult one that required many failed attempts and the reorganizing of many Legos.

“It was hard,” said senior Hailey Byrd. “We messed up a bunch and had to tear [the Legos] all out and start again.”

However, despite the difficulty level of the project, students said they enjoyed working on the murals and learning about the African American leaders they chose.

“[The murals] look really cool finished,” said sophomore Emma Allen. “There is a lot of detail for them just being made out of Legos.”

“It was a lot of fun,” added sophomore Jackson Olson. “At first, I didn’t know how it was going to play out because when you are up close, you can’t see the whole picture, but you take a couple of steps back, and there it is.”

Though February is coming to an end, the students said they were happy to have honored African American leaders with their art during Black History Month.

“It’s important to recognize the contributions they have made to society,” Olson said.