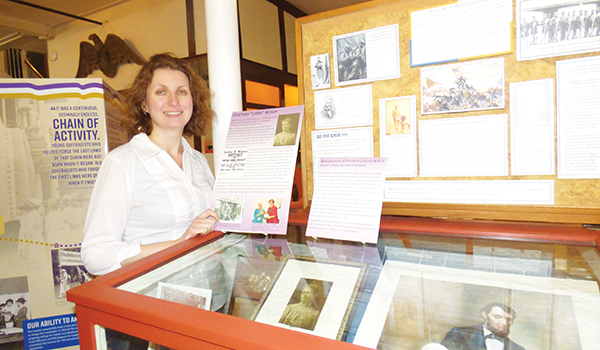 NILES — History is all around in southwest Michigan, and that includes a rich African American heritage to be celebrated not only in February during Black History Month, but throughout the year.

“This is our community’s history not just in February but all year long,” said Niles History Center Assistant Director Mollie Watson.

She and History Center Director Christina Arseneau have made concerted efforts to gather more information about local African American history and include it in the Fort St. Joseph Museum exhibits. The museum has an exhibit highlighting local African American history and is adding information into other exhibits on the Civil War and local businesses.

“For years, there was not a lot of outreach to those [minority] communities,” Arseneau said. “If people thought a museum didn’t cover their history, they wouldn’t reach out to give items to them. We’ve done an outreach to people at Mount Calvary Baptist Church and other places. I feel a mandate to cover history that’s not in the books.”

In the Niles area, African American history can be found both in plain sight and out of the way places.

While Michigan state historical markers can be found at the Ferry Street School, once known as the “school for colored children,” and the nearby Mt. Calvary Baptist Church where many African Americans still worship, those aren’t the only sites of historical significance.

One example is noted African American artist Lottie Wilson, who lived in Niles in the mid 1800s and early 1900s. There is no historical marker for her, but people can drive by her old family home on N. Fifth Street, visit her grave in Silverbrook Cemetery and see her most famous painting of Abraham Lincoln and Sojourner Truth in the Niles District Library.

Arseneau and Watson said many local residents still do not realize Wilson’s significance not only to local history but national history. She was the first African American woman to graduate from the Chicago Institute of Art School and was a nationally renowned artist.

Wilson was one of the first African Americans to have artwork displayed at the White House when the “Lincoln-Truth” painting was presented to President Theodore Roosevelt in 1902. She was also an activist who fought for women’s suffrage and civil rights. She was inducted into the Michigan Women’s Hall of Fame in 2016.

Watson noted that she and Arseneau have continued to learn more about Wilson and her influence in other parts of the country. She said in fact that the painting of the 1864 meeting between President Lincoln and Sojourner Truth is right now on loan to the Brandywine River Conservatory and Museum of Art in Chaddsford, Pennsylvania.

Information about not only Wilson, but others in her family can be found in Fort St. Joseph Museum exhibits. Her father, Calvin Wilson, had a barber shop in downtown Niles at Third and Main streets, and her extended family, the Finleys, are one of the city’s earliest families.

Pasquel Finley, a Frenchman, settled in Niles with his wife, who was of black and Indian heritage, and their children in the late 1840s. He was active in the Underground Railroad, and his descendants have been active in the community ever since, including establishing the first Prince Hall Masonic Lodge in Michigan at Ferry and Seventh streets.

People can learn more about the Finleys at the museum as well as at the Barron Lake Cemetery on Dick Street in Howard Township, where Pasquel Finley and his youngest son, John Finley, are buried, and a marker gives details of their lives.

Arseneau noted that while it is hard to prove specific buildings as Underground Railroad stops, southwest Michigan was known as a haven for former slaves escaping to the north.

“There were places here in the N. Fifth Street corridor and in Hatcherville east of the city where people felt safe enough to stay,” she said.

Of course, Niles was not the only place in the area with ties to the Underground Railroad. Historians believe that as many as 1,500 slaves passed through Cass County to Canada by the mid-1800s with countless others deciding to stay.

Two state historic markers commemorate the Underground Railroad in Cass County. One of the markers is at Chain Lake Baptist Church and Cemetery on Chain Lake Road in Calvin Township, while the other is at Bonine Elk Park on M-60 near Vandalia.

Other sites of note include the Bonine House on M-60 at Penn Road, which has been restored in recent years by the Underground Railroad Society of Cass County. The society has a full driving tour of 19 Cass County sites on its urscc.org website. People can find information on all state historic markers on the Michigan History Center website.

DOWAGIAC — To align with its mission of helping community youth, the local Elks Lodge will host an annual dinner... read more