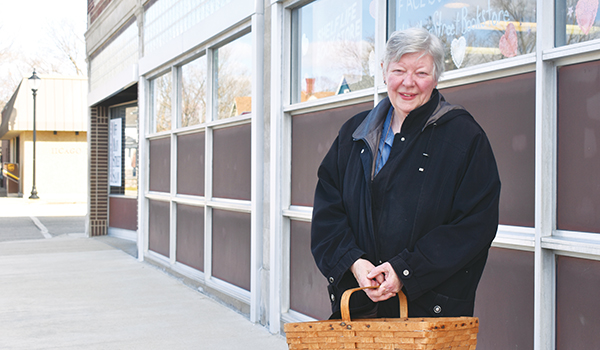 NILES — Since she moved to the city when she was 2 years old, Heather Pletcher has been a Niles resident. Since 1974, she has made and sold her painted wooden ornaments of historic buildings in the Niles area.

Now, she continues to cut, paint and varnish pieces of Niles’ history, which often hang on residents’ Christmas trees or sit on living room shelves and in church meeting rooms.

Pletcher began creating and selling her ornaments in the 1970s after learning how to sand and work a band saw. She and her husband set up shop at Thieves’ Market in South Bend as a way to earn income. 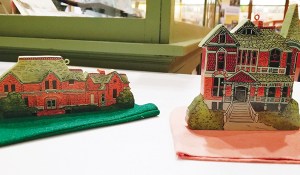 She said she took to the art quickly. In 1976, in celebration of the U.S.’ bicentennial birthday, she created a host of ornaments for the city of Niles. Around the same time, her ornament of the Niles Amtrak depot was given to President Gerald R. Ford as a gift when he visited the city.

Now, she has more than 300 ornament designs, 20 of which are of historical buildings in Niles, Buchanan, St. Joseph and South Bend. She said the area is filled with such buildings, many of which she hopes to capture in art.

The other designs are of various themes, from Easter eggs to fairy tale stories.

One ornament features the house from the nursery rhyme, “There was an Old Woman Who Lived in a Shoe.” One side of the ornament shows the shoe’s exterior. The other side shows the full interior, room by room, as if the side of the shoe was removed.

The ornament’s bottom, like all others, has a mark signifying the date it was made and its number in production — Pletcher sometimes created 100 ornaments of one design.

Her methods have largely remained the same 46 years after her wooden ornament-making began. She takes her envelope-sized piece of wood, — now pine instead of poplar — cuts it with a band saw, sands it, paints it and coats it with varnish.

Pletcher’s ornaments cost $30 and can be purchased at the Niles History Center, 508 E. Main St., or at the Buchanan Art Center, 117 W. Front St.

For those that want to spend less, Pletcher’s cards can be purchased for $2 each. Some have similar designs as her historic building ornaments. For instance, her card of The Ready Theatre in Niles is like her ornament except she has added more details to the scene around the building.

Pletcher also paints on canvas, an extension of her time majoring in fine arts at Maryville College in Tennessee.

“I’m sort of evolving from tiny to big and free,” she said.

Pletcher calls her canvas art more abstract than her literal ornament and card designs. She shows her art in galleries, some of which have garnered her awards. She said she has also sold the paintings nationwide.

While Pletcher plans to slow down her ornament production, she hopes to continue painting in an area she said is interested in art again.

“We went through that change of people leaving Niles and the stores getting emptied,” she said. “It affected the art. Then, the Niles Art Association started up around 2000, and that’s been helpful. I know there’s other interest, too.”

Now, she is a member of the association and the Buchanan Art Center.

What is the key to becoming a successful area artist? Pletcher said joining groups that show together in galleries. Not only is there community, one person only needs to create a few art pieces to show.

NILES — The Niles Charter Township Board of Trustees made moves Monday evening to better prepare its firefighters for emergencies.... read more