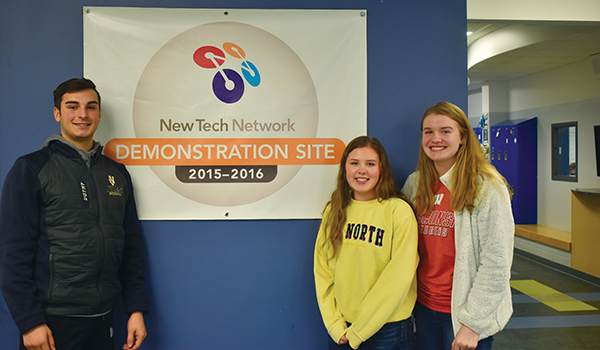 NILES — A day trip to Lansing resulted in a plan of action for Niles New Tech students to better their school and the greater Niles community.

On Feb. 4, 17 students met with other New Tech Network students from Belleville, Lansing and Pickney at Everett High School to solve two problems: plastic water bottle use and the disconnect between students in New Tech programming and traditional programming.

The issues may not have much in common, but attendees of the event said they were personally impacted by both.

Niles New Tech students Audrey Dixson, Anna Tibbetts and Cade Vota all attended the trip with principal Jerry Holtgren because of their interest in the event.

The students are three of approximately 85,000 students part of a national network of New Tech schools, which emphasize hands-on group learning that can be applied to personal and professional experiences.

“You get a lot closer to teachers, and it’s more like a family rather than just a class that you’re with,” Dixson said.

Yet, Niles New Tech students also felt left out of the larger school districts they are part of. Niles New Tech is an extension of Niles Community Schools. It has a separate wing at Niles High School.

Students between the four New Tech schools in Lansing discussed ways to bridge the communication and social gaps between New Tech and traditional students.

Now, Niles students are hashing out plans to bring the entire high school together, regardless of educational program.

“We’re just trying to find more activities we can do as an entire school system rather than just as grade levels,” Vota said.

Vota, Dixson, Tibbetts and others are also working to solve the issue of plastic water bottle consumption.

The trio said single-use plastic water bottles often end up in landfills in high numbers or as litter. Either way, they remain for centuries, polluting the landscape.

In Lansing, students discussed what Dixson called “knows” and “need-to-knows” — what they already knew about plastic bottles and what research they still needed to do.

That led to a larger discussion of how plastics, including mircoplastics, which are found in a wide variety of items, can easily end up in ecosystems and have been linked to cancer.

Students left the day of group brainstorming and workshops with a sense of further research to do as they worked on ways to limit the use of plastics locally and statewide.

“Now, we are meeting here in the [school] commons once a week to try and come up with more ideas on how we can actually pursue that,” Tibbetts said.

Soon, Niles New Tech students will link with the Belleville, Lansing and Pickney students they met at Everett High School to share their ideas and plans of action.

Both efforts in reducing inter-school communication and in school plastics were extensions of the work New Tech students do each day, Vota said.

“New Tech kind of teaches you a reason as to why you should learn it,” he said. “It gives something to tie all the content to. You’re not just remembering all these facts for a test you have next week.”

Instead of learning about plastics for a quiz, Vota said he learned about them in non-lecture methods to solve a problem he cared about.

The same went for New Tech’s issues, too. He used his group problem-solving skills developed during his school days and worked with students across the state to identify ways to improve school life.

The work Vota and others are completing individually and with students of other schools come on the heels of “Tomorrowland,” a series of community presentations by Niles New Tech ninth graders on ways they hope to improve their hometown.

NILES — A Nashville, Tennessee band with Michigan roots will seek to provide joy through music Friday with a free... read more