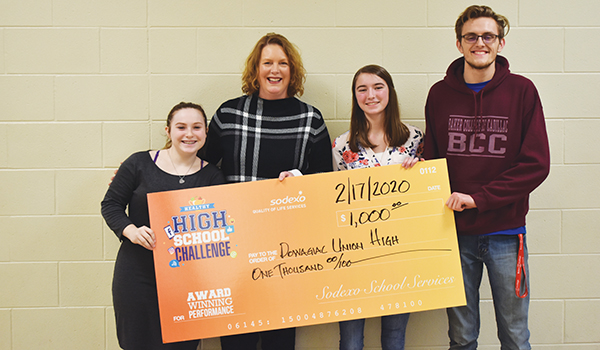 DOWAGIAC — A check presentation kicked off a Dowagiac Union Board of Education meeting on Monday night.

The check will be donated to the high school’s student senate, where students will then decide what it will be used for.

In the past, the money has been used for a tug-of-war rope and an Apple iPad used during announcements, said Beattie, a member of the student senate.

The Healthy High School Challenge is hosted every October, and Dowagiac Union High Schools has participated in the challenge for six years. This year, out of 298 schools, Dowagiac placed 80th, which awarded the school $500. This is the school’s second year of earning additional money in the spirit contest.

“I am so excited. They’ve done such a good job of getting together and really trying to do the right things in terms of eating healthy,” Cahill said, following the check presentation. “It’s also part of participation. Our students are eating more. They are coming up and going through the line, and that helps. There is nothing more than to just be super proud of these guys.”

• The board unanimously voted to approve the authority of Superintendent Jonathan Whan to negotiate and finalize a lease agreement for the ICG building.

• Whan said Gov. Gretchen Whitmer’s budget proposal for the next fiscal year was recently released. In a three-part system, the governor drops her budget shortly after the state of the union, then the house of appropriations drops a budget and the senate will does a budget, Whan said. After all budgets are released, negotiations will take place.

“The governor’s budget was decent in regards to a Dowagiac perspective,” Whan said. “There was a big push in elementary/preschool funding increase. However, surprisingly Cass County and specifically Dowagiac were not on that list.”

Whan said now would be an ideal time for members of the community to reach out to their local state representatives as Dowagiac has a need for elementary/preschool funding.

•Whan spoke to the importance of the 2020 Census in Cass County, as it can have an impact on federal and state funding.

• Student representatives said Dowagiac Union High School has been highlighting students in a “spotlight of the week” during morning announcements. It brings positivity to students around them and helps the school family grow, said Beattie, also a student representative at the meeting.

DOWAGIAC — Inside the Timbers of Cass County, Duane and Marlene Lietz spent their Valentine’s Day together. The couple, married... read more